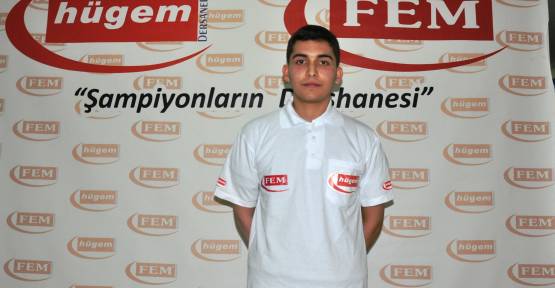 The results of this year’s YGS exam that was held on March 23 were announced on the website of the Student Selection and Placement Center (ÖSYM) on Saturday. According to the YGS results, Türkyılmaz, from the FEM University Preparation School in Malatya, received the highest score in the YGS-3, YGS-4 and YGS-5 categories. Türkyılmaz ranked second in the categories of YGS-1 and YGS-6, while he ranked sixth in YGS-2. The FEM University Preparation Schools are the nationwide preparation courses that are affiliated with the Hizmet movement, which is inspired by the teachings of Islamic cleric Fethullah Gülen.

The government, in a surprise move, decided in November of last year to close down the exam prep schools, stirring a massive debate. These schools, with their affordable fees, are regarded by mostly middle or low-income families as an equalizer of educational opportunities. Although there has been a strong public reaction against closing these schools, Parliament passed a law on Feb. 28 that was later approved by President Abdullah Gül to shut down dershanes. According to the law, exam preparatory schools will be allowed to operate until Sept. 1, 2015, and all preparatory courses will be closed down after this date. Despite all efforts by the government to shutter them, the dershanes still continue to play a crucial role in students’ success in university entrance exams.

Speaking to Today’s Zaman, Türkyılmaz expressed his delight at his exam results. Stating that his success is a result of his disciplined and hard studying, Türkyılmaz said he also plans to get good scores in the upcoming Undergraduate Placement Examination (LYS), the second round of the new university entrance system. Those who have passed the YGS qualify to take the LYS to be held on June 15 and 22.

Türkyılmaz said the Malatya Science High School, which he attends, was influential in his success, but his teachers at the Malatya FEM University Preparation School had the most influence on his excellent results, adding: “The Malatya Science High School already had the ability to place me among the top 100 students in the exam, but what made me the champion of the exam was actually my preparation course. I don’t find the government’s recent attempts to close down dershanes [exam preparation courses] right. I don’t want to be disrespectful towards the work of all my teachers; every one of them has contributed to my success. My education at the public high school also contributed to it, but I want to emphasize this again that my dershane made me the champion.”

About his plans for the future, Türkyılmaz said he wants to attend Hacettepe University’s medical faculty.

Türkyılmaz’s mother, Türkan Türkyılmaz, told Today’s Zaman that she and her husband were very happy when they heard their son’s results, adding that both his school and dershane contributed to his success.

Another student who received high scores in the YGS exam was Şafak Ceren Uslu from the FEM University Preparation School in Mersin. Uslu ranked third in the YGS-3 category. Speaking with Today’s Zaman, Uslu said she owes her success to her parents, teachers, school and dershane. Stating that she has been receiving supplementary education at the Mersin FEM University Preparation School since the fourth grade, Uslu said she owes most of her success to her dershane.

Many dershanes, which offer after-school classes to prepare students for government-administered high school and college entrance exams, are affiliated with the Hizmet movement. Education is central to the mission of the movement. Millions of students prepare at the dershanes for entrance examinations to win limited spots at state universities. However, the movement has been accused by Prime Minister Recep Tayyip Erdoğan of seeking to topple his government.

Tensions between Erdoğan and the movement soared when a graft scandal erupted on Dec. 17, 2013, when an investigation implicating three ministers’ sons and businessmen close to Erdoğan went public with a string of early morning raids.

The scandal, which Erdoğan has deemed a plot to oust him by a “parallel state” made up of Hizmet movement supporters, erupted weeks after the government moved to shut down the prep schools, worsening the public row with the cleric’s followers.