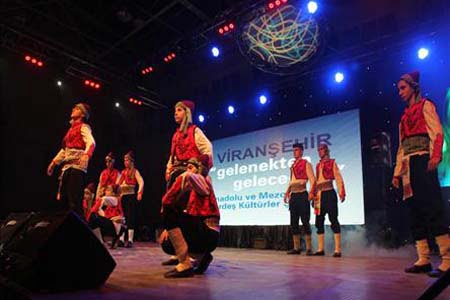 30 students from the Turkish schools in the north of Iraq left the audience at the Viranşehir Indoor Hall awestruck with the rendition they came up with. The night started with one minute of silence and the national anthem. The Iraqi students enthused the audience with their folk dances and songs, and the folk songs they sang in Kurdish received standing ovation from the packed hall. The students were also fascinated by the interest shown in them.

The governor of Şanlıurfa Celattin Güvenç awarded the businessmen of Viranşehir who organized the night with plaques. Güvenç said he was proud of the teachers, their families who raised those children.

The president has branded the annual contest of foreign students on the Turkish language the “greatest service” to Turkey, Turkish culture and its language, as he met with contestants participating in this year’s Olympiads. President Abdullah Gül told reporters while meeting with participants of the 11th Turkish Olympiads in the Çankaya presidential palace that organizations […]