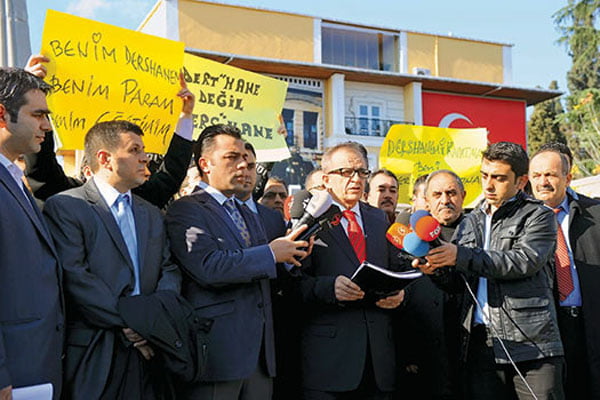 The debate over the Turkish government’s move to shut down private prep schools is growing with a battle of words between the administration and private education representatives.

Education Minister Nabi Avcı has said the government’s new action on private test prep schools is designed to regulate and transform the institutions rather than close them amid reaction from education circles and Islamic scholar Fethullah Gülen’s followers.

“There is no bill draft to shut down test prep schools [dershane in Turkish]. The articles circulating nowadays are the preparations of the draft bill,” Avcı said Nov. 17, emphasizing that the issue was set to be brought to the Cabinet’s agenda late last night.

Avcı said their plan did not include “reading halls” and their reason for transforming test prep schools was to prevent the right to education from being subjected to “tolls,” refuting a recent daily Zaman report which alleged that the government had finished work on a draft version of a law calling for the closure of all types of dershanes beginning with the 2013-2014 school year and imposing fines on those that continue to operate.

The government initially denied that the draft ever existed, but later admitted that there was a draft, while claiming that the wrong version of the draft appeared in the press.

“Rather than shutting prep schools down, transforming them is the real issue. No draft has yet been presented at a Cabinet meeting,” Avcı said. “All of a sudden, [some] act like the education minister is striving against prep schools. This is an old issue. A study was launched with the 10-year-old [Justice and Development Party – AKP] government [to solve the problem],” Avcı said.

Self-exiled Islamic scholar Gülen, on the other hand, asked his followers “to be resolute and not yield to despair,” in a speech posted on herkul.org, a website that broadcasts his speeches.

“The winds of opposition may blow, dispersing people in a sweep in many cases. People with a weak character may emerge and they, motivated by certain interests, may sway from side to side. In the face of what has been happening, it must be a hallmark for a believer to never be shaken, not to give in to despair and not to let himself be squashed,” Gülen said.

“I don’t understand why the Gülen movement has reacted so strongly through its various channels. We have explained [the reform] several times. If the prep schools are turned into private preparatory high schools, there won’t be any loss,” Avcı said Nov. 16.

“The need for prep schools will continue as an exam-based education system continues,” Köprülü was quoted as saying by the state-run Anadolu Agency.

Köprülü said dersanes were institutions that served students in a more economic and systematic way in comparison to private lessons.

Anatolian Industrialists and Businessmen Federation (ANFİSED) head Ahmet Coşkun echoed the comments, drawing attention to the 100,000 employees who work in dersanes that will join the “army of the unemployed” if the government’s plan comes to fruition.

The government act is against the right to private enterprise and a majority of the society is against the ban, he said in Konya, Anadolu Agency reported.