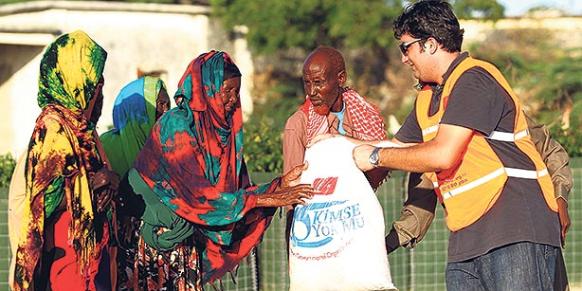 Kimse Yok Mu, a prominent Turkish charity that has been granted various prestigious awards for its aid activities in both Turkey and around the world, distributes meat to families in need on the occasion of Eid al-Adha in Somalia on Nov. 6, 2011. (Photo: Today's Zaman, Mehmet Ali Poyraz)

Speaking to Today’s Zaman, Kimse Yok Mu lawyer Muhittin Yılmaz said they found out about the investigation when the prosecutor sent the subpoena seeking figures on the organization’s activities for Eid al-Adha in 2011. According to Yılmaz, the statement included odd questions such as how much money was collected from donations for Eid al-Adha, how many animals to be sacrificed were bought with the collected donations and when and where these animals were sacrificed. The prosecutor even asked how many sheep and goats were sacrificed in 2011. However, Yılmaz said Kimse Yok Mu only sacrificed cattle and cows that year, not sheep and goats, adding that such questions show that the prosecutor did not research the organization and that the investigation file thus lacks any concrete information on the charity.

Criticizing the terrorism investigation being conducted against the charity, Yılmaz said targeting a charity that has become the pride of Turkey with its charitable activities around the world shows the extent to which the Turkish judiciary has deteriorated. Pointing to the court decision ordering confidentiality over the investigation against Kimse Yok Mu, the lawyer said the gag shows that the investigation file is empty, adding that it gives the impression that the prosecutor is trying to formulate a crime rather than investigate an existing one.

Posting successive tweets on his Twitter account, Kimse Yok Mu President İsmail Cingöz also lashed out at the terrorist investigation being conducted against the prominent charity, pointing out that those government officials who are conducting the investigation into Kimse Yok Mu were once involved in the charitable activities of the organization. Cingöz also shared photos of a medal given to Kimse Yok Mu by Parliament under Justice and Development Party (AK Party) rule.

Kimse Yok Mu, which is affiliated with the Gülen movement, also known as the Hizmet movement and inspired by the teachings of Turkish Islamic scholar Fethullah Gülen, has become a target in a battle launched by the AK Party government against the movement. Several pro-government media outlets are carrying out a smear campaign, with publications accusing the charity of engaging in illegal fundraising activities despite a lack of evidence to that effect.

Independent İstanbul deputy Hakan Şükür on Friday also commented on the terrorist organization investigation faced by Kimse Yok Mu, saying: “If you [the government] are so crazy as to launch an armed terrorist organization probe against Kimse Yok Mu, then you have already reached the final point [in terms of persecution]. No one will even associate you with the Feb. 28 [postmodern coup era], because your persecution has already exceeded the persecution conducted in that era.”

Şükür went on to add: “Launching an armed terrorist organization investigation against Kimse Yok Mu, which provides aid to thousands of people in need, has even reversed the devil’s definition of persecution!”

Former Association of Human Rights and Solidarity for Oppressed Peoples (MAZLUM-DER) President Ömer Faruk Gergerlioğlu, speaking with Today’s Zaman, said, “It is a sin to associate aid with terrorism.”

Stating that Kimse Yok Mu has always been involved in good and beneficial aid activities, Gergerlioğlu said it is very upsetting that a charity is being associated with terrorism due to a political debate. “We have known Kimse Yok Mu for a long time. The only thing that it has been engaged in is aid work. They do good work,” said Gergerlioğlu, adding that it is unfair and madness to accuse a charity that provides aid to orphans and the poor of being an armed terrorist organisation.

Gaza group: No one will believe ‘terrorist’ lie

The chairman of the Gaza Peace Volunteers Association, Dr. Nasser al-Sadi, spoke to Today’s Zaman about strong reactions to the terrorism investigation against Kimse Yok Mu, saying that they do not believe this lie and that no one else will believe it either.

Sadi said his association has been working in conjunction with Kimse Yok Mu for six years and that he cannot understand why Kimse Yok Mu members are being slandered in such a way.

“What is the meaning of accusing an association of being an ‘armed terrorist organization’? I just want to say that I am really sorry. No one will believe such a lie,” Sadi said, adding that people in Gaza and Palestine are praying for Kimse Yok Mu and its donors. Sadi said Kimse Yok Mu provides aid to everyone, irrespective of their race, sect or religion.

“Each year during the Eid al-Adha holiday they sacrifice the animals here in front of the eyes of all. The aid activities being conducted here are being carried out under the supervision of the Palestinian Interior Ministry. The ministry controls how the animals are sacrificed and distributed, and the ministry registers all these acts in its records,” said Sadi.

The 10th Chamber of the Council of State announced on Nov. 25, 2014, its decision regarding an appeal filed by the charity against the October 2014 Cabinet decision that removed Kimse Yok Mu’s right to collect donations without obtaining permission from the relevant authorities. Noting that the Cabinet had justified its decision by arguing that the charity was involved in irregularities in collecting donations, the court said it found no irregularity that would lead the charity to lose its qualifications as an organization that exhibits “accountability, transparency, institutionalization and reliability.”

Kimse Yok Mu, which was established in 2002, provides aid to millions of people in need in 113 countries around the world. The charity was awarded the Turkish Parliament Outstanding Service Award in 2013 under the Justice and Development Party (AK Party) government.

Kimse Yok Mu was named one of the world’s 100 best NGOs by Swiss non-profit group Global Geneva in 2014. The charity — which brings aid to millions of people in Africa, the Middle East and Asia — has more than 3 million donors and 208,000 volunteer personnel.

The charity provides disaster and post-war aid; services in health and education; aid during the Eid al-Fitr and Eid al-Adha holidays; clean water projects, particularly in African countries; and aid for orphans. Kimse Yok Mu provides aid to 4.5 million people in need annually and it has distributed aid worth over TL 507 million in the last three years.