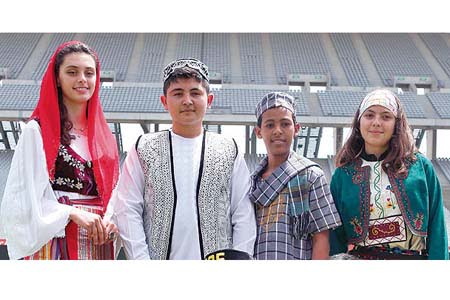 Some of the students who are taking part in this year’s International Turkish Olympiads pose for photos while one of them speaks to a reporter at Atatürk Olympic Stadium in İstanbul on Wednesday. (Photo: Cihan)

The 11th International Turkish Olympiads, which is a festival celebrating the Turkish language and brings together 2,000 students from 140 countries this year, began in İstanbul on Wednesday.

Press members were informed about the schedule of events for this year’s Olympiads.

At the news conference, Sağlam said that prior to the sixth event, the Turkish Olympiads were only held in İstanbul and Ankara but the events were spread to other provinces later on.

Sağlam noted that international students will take part in performances, including singing and poetry recitals, across 55 Turkish provinces this year.

The Cultural Festival of Turkish Olympiads will be held at İzmir Kültürpark for the first time this year, according to Sağlam.

Speaking about those who are behind the event, Sağlam said: “There are two heroes behind this festival: the teachers who teach these children under difficult circumstances and teach them Turkish while the other is the people who support them.”

He also said approximately 15,000 students across the world have prepared for the Turkish Olympiads.

Sağlam said 90 students from 35 counties took part in the television commercial for this year’s event. “In the commercial, Olympiad students from different nationalities, religions and colors come together around the same table, they mingle and give messages of peace, love, friendship and brotherhood,” he said.

He said with the participation of new countries in the Olympiads, new categories have been added to the event.

“Fifteen Turkish books chosen by TÜRKÇEDER will be read by the students and the students will be given an exam on them. In addition, there will an essay competition. University students will take part in this competition and write an essay on a chosen subject. They will defend their essays before an academic jury,” explained Akalın.

Tekalan said the Turkish Olympiads should not only be seen as an event of songs and poetry but as something more profound to do with peace and fellowship. “Humanity will see that it is possible to forget internal and external problems in countries for a short time, alleviate pain and get together for a common goal. History writers will allocate a special place to the Turkish Olympiads in the future,” he said.

Last year’s Turkish Olympiads were attended by students from 135 countries. Students from the Dominican Republic, Libya, Congo Republic, Rwanda and Brunei Sultanate are also attending the event for the first time this year.