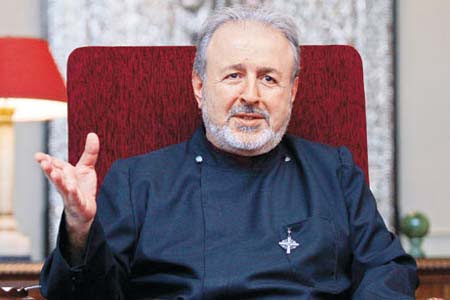 Archbishop Aram Ateşyan, deputy patriarch of the Armenian Patriarchate, based in İstanbul, told Sunday’s Zaman after returning from the Los Angeles Anatolian Cultures and Food Festival that Armenians are ready to be a bridge between the people of Turkey and the United States.

“And having food at the festival makes it all easy. All problems can be solved more easily at the dinner table. Sharing the same food makes it easier for all to feel together. We, the Armenians of Turkey, are supportive of all friendly relations between the two peoples. We are ready to be a cultural and humanitarian bridge,” he said, answering our questions via e-mail as he is currently traveling around the country

The Anatolian Cultures and Food Festival, which has been bringing the peoples, religions, languages, history and foods of Anatolia to the United States every year for four years, was held in Los Angeles from May 16-19 with the participation of tens of thousands of people.

Answering our questions, Ateşyan said that Anatolia, our national territory, had been moved all the way to America.

Have you been to the festival before? What were your observations?

I have been invited to the Anatolian Cultures and Food Festival before but did not have a chance to go; it was possible this year. I’ve been impressed with what I’ve seen. First of all, it’s been a nice feeling to see Anatolia moved all the way to America. As you know, a country’s consulate or embassy in a foreign country is considered that country’s national territory even though it is in a foreign land. The festival site was transformed into our national territory. In addition, the sincerity and efforts of the people who worked to create this event have impressed me. And culture was integrated into the event to make it interactive and not like a museum.

Since the festival was in a region of the United States where there are many Armenian people, what significance did this have for you?

Armenians are one of the most ancient peoples of Anatolia. It is not possible to talk about Anatolian culture and history without Armenians. We Armenians know this. We are pleased that others have realized this as well. There have been constructive developments like the fact that the Ahtamar Church [10th-century Armenian Church of the Holy Cross on Aktamar Island in Lake Van] was recreated on the festival grounds, there were Armenian artists and the organizing committee had activities relevant to Armenians. The festival also tried to appeal to the Armenian population in the Los Angeles area, and it was partly successful in that regard. Armenians who moved to the area from İstanbul had a very positive attitude toward it, but others kept a distance. It is of course not easy to defrost ice that has been in the freezer for years, but we can say that this festival was done at the right place and at the right time.

Armenian-Americans received us very well. I arranged my travel plans so that I would be able to spend time with them. Our reception by the area’s spiritual leader, Archbishop Hovnan [Derderian], went very well, and we came together with the Armenian-American community’s leaders on various occasions. They were most curious about positive developments in Turkey and whether these will be permanent. They also asked questions about secularism and religiousness. And they were also curious about how we were treated in Turkey. We tried to answer them as best we could.

What anecdotes would you like to tell us from the festival?

At the festival site, some visitors thought that I was an imam or hodja. While the folk dance group was performing the line dance [halay], we found ourselves among them. We easily became friends with the people we traveled with from İstanbul. Our trip was fun-filled with songs and jokes.

What do you think about the importance of such events with regards to improving dialogue between people from Turkey and Armenians in the United States?

I think it is very important for old friends to get to know each other through the common denominator of culture. Before getting to know somebody, you first need to meet that person. Such festivals provide the opportunity to meet. It is of course constructive and very good for dialogue to objectively see and experience in such environments how Armenians, Turks, Kurds and other [nationalities] have similarities and how much they have given to each other and taken from each other. And having food at the festival makes it all easy. All problems can be solved more easily at the dinner table. Sharing the same food makes it easier for all to feel together. We, the Armenians of Turkey, are supportive of all friendly relations between the two peoples. We are ready to be a cultural and humanitarian bridge.

MERVE BÜŞRA ÖZTÜRK Turkey commemorated the 98th anniversary of the tragic events of 1915 — the killings of Anatolian Armenians during World War I — on Wednesday. April 24 is the date chosen to recognize the events of 1915 when close to 200 Armenian religious and intellectual leaders were rounded up in İstanbul and later […]