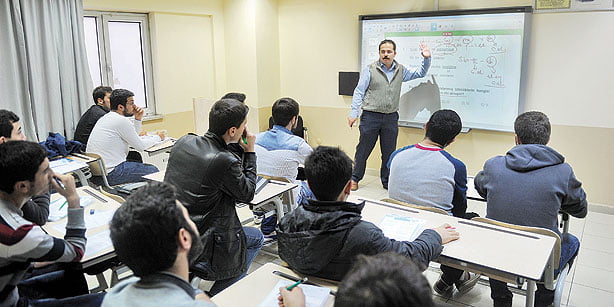 A classroom of a private exam prep school providing education to high school graduates is shown in this file photo. (Photo: Today's Zaman)

Fikret Duran, one of the lawyers representing Gülen, told Today’s Zaman the scholar had instructed them to withdraw complaints against those individuals who had personally insulted him but had apologized without any condition.

In the second court hearing of Nuran Alemdar on Tuesday, a housewife who is being tried by the Bakırköy 48th Criminal Court of First Instance in İstanbul for insulting Gülen on her Twitter account, she told the court she had been swayed by the offensive language of the government against Gülen and had used words that she cannot even recall now. “I apologize for the words I used,” she said.

Upon her apology, Duran withdrew the complaint from the court. Alemdar was on trial for libel and facing two years, seven months in prison.
Gülen has been a target of President Recep Tayyip Erdoğan and the Justice and Development Party (AK Party) after a major graft probe revealed on Dec. 17, 2013 implicated people from the inner circles of the party and Erdoğan, including his son Bilal.

Since then, without showing any concrete evidence, Erdoğan and the AK Party leadership have accused Gülen and sympathizers of the faith-based Gülen movement — popularly known as the Hizmet movement and inspired by Gülen’s ideas — especially those in the police forces and the judiciary of being part of a plot that aims to topple the AK Party government.

Strongly denying the accusations by the government, Gülen’s lawyers and those close to the movement took legal action against those who personally insulted or directed unfounded accusations against them.

At a United Nations conference organized by the Journalists and Writers Foundation (GYV) on Friday in Geneva, a wide range of participants agreed that global challenges against peace should not lead to apathy, while reiterating their commitment against all kinds of extremism.