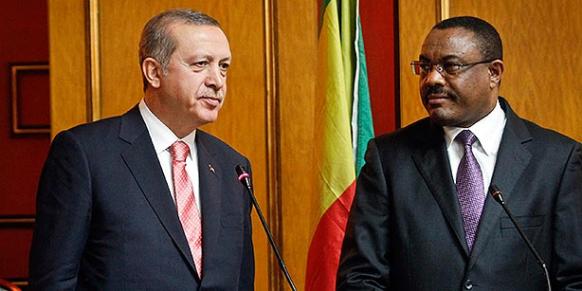 President Recep Tayyip Erdoğan is pressing ahead with campaigning the closure of Turkish schools affiliated with the Gülen movement, also known as the Hizmet movement, inspired by Turkish Islamic scholar Fethullah Gülen, in African countries, causing a number of members of the opposition parties in Turkey to reacted against his move.

“In the countries we visit we have been talking about the status of these schools and saying they should be closed down,” Erdoğan was quoted as saying by the state Anadolu news agency during a visit to Ethiopia on Thursday.

Speaking to Today’s Zaman on Thursday, Gök said, “It is not natural for a country’s president to speak against his country’s educational institutions serving in a foreign country and ask for the closing down of these schools.”

“There is no logical explanation for asking to close down Turkish schools in Ethiopia. When Erdoğan is asking for the closure of these schools, is he presenting a court decision [as a reason for this]? Does he present any evidence for his accusations against those schools? Even if he has proof, it’s not Erdoğan’s job to pursue this,” said Gök.

“Being against institutions which contribute to boosting the friendship between the two countries will not contribute to this friendship. I want to express my sadness as a member of the Turkey-Ethiopia Parliamentary Friendship Group,” said Gök.

Faik Tunay, the CHP’s İstanbul deputy and member of the Turkey-Ethiopia Parliamentary Friendship Group, said Turkish schools operating abroad belong to the Turkish nation, and stressed that nobody had any right to “badmouth” them.

“Mr. President’s smearing of the Turkish schools is not only utterly wrong but also very bad for his image,” he noted to Today’s Zaman.

Tunay emphasized that the host countries do not welcome remarks like these either. “Can you imagine a German or French leader asking for their own cultural centers to be shut down?” he asked.

Opposition Nationalist Movement Party (MHP) Kütahya deputy Alim Işık, another member of the Turkey-Ethiopia Parliamentary Friendship Group, also told Today’s Zaman that nobody is against the Ministry of Education opening school outside of Turkey. But, Işık said, closing down the current schools and seizing those schools’ property is not right for anyone with a conscience.

According to Işık, the government cannot even deal with assigning teachers inside Turkey and cannot prevent the outlawed Kurdistan Workers Party (PKK) from damaging Turkish schools in the Southeast.

“These statements only serve to change the agenda in the country and drop the issue of corruption,” stated Işık.

He also recalled that the same people who support the closing down of Turkish schools abroad are the same ones who praised these schools only a few years ago.

“If those schools were so dangerous, why were you supporting them back then?” Işık said. He added that it is not right to accuse people of certain crimes without showing any evidence.

MHP Antalya deputy Mehmet Günal also said it is a sign of weakness for Erdoğan to make remarks against these schools in an international forum. Günal also said Erdoğan’s call to close down the schools affiliated with Gülen is an effort to cover up the corruption scandal of Dec. 17-25, 2013 which implicated many members of the ruling Justice and Development Party (AK Party).

Günal said these schools are important as they provide Turkish education and keep Turkish and Islamic culture alive outside Turkey.

The Turkish president has declared the movement, inspired by Gülen, a former ally, a treasonous enemy, after a corruption scandal involving people in his inner circle that erupted with a wave of detentions on Dec. 17, 2013. He openly declared last year that he would do whatever it takes to eliminate the “parallel structure,” a term he invented to refer to alleged sympathizers of the movement within the state bureaucracy, even if this requires a “witch-hunt.”

There are more than 100 Gülen-inspired schools in Africa, as well as other parts of the world. The government has praised these schools in the past for being key institutions promoting Turkish culture abroad.

Erdoğan is currently on a tour of certain African countries. He was was welcomed in Addis Ababa on Thursday with an official ceremony by Ethiopian Prime Minister Hailemariam Desalegn.

During a joint press conference with Desalegn, Erdoğan said Turkey’s relations with African countries in recent years have developed a great deal and Turkish investors can contribute to the energy, construction and defense sectors in Ethiopia.

Erdoğan stressed that Turkey and Ethiopia aim to boost their bilateral trade volume to $500 million. The trade volume was $400 million last year, he added. A large group of Turkish businessmen area also accompanying Erdoğan on his African tour. Erdoğan said with the meetings that took place in Addis Ababa on Thursday, Turkey and Ethiopia are starting a new phase of economic cooperation.

The president also said he agreed with Desalegn to cooperate against the “parallel state,” another term he uses instead of “parallel structure.”

Prime Minister Ahmet Davutoğlu, who is currently in Davos, made similar remarks to the president on Thursday, saying that the Turkish Ministry of Education is ready to offer the same service provided by Gülen schools worldwide. Davutoğlu stressed that this is not a new initiative, as the Turkish government has been working on it for some time in order to prevent the “damage” of Gülen-affiliated schools outside Turkey. He said all schools outside of Turkey will be under the control of the ministry, as these schools serve as a cultural bridge between Turkey and other nations.

Davutoğlu also said that Ministry of Education is about to complete its “work” on Turkish schools and that the results of this will come to Cabinet most likely next week.