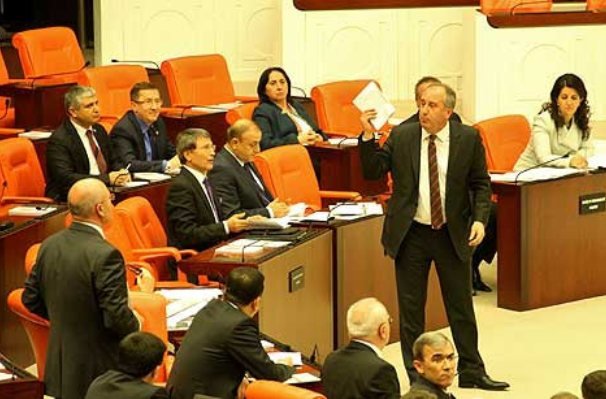 What Turkey has been going through since the Dec. 17 graft probe can be viewed as the crystallized version of how bad Turkey’s so-called “advanced” democracy has turned out to be.

The spokesmen of the ruling Justice and Development Party (AK Party) government under the leadership of Prime Minister Recep Tayyip Erdoğan have employed the label “advanced democracy” to attribute symbolic values to their democratization policies. To be honest, policies like the lifting of the headscarf ban in public places or introducing elective Kurdish courses in private schools can be seen as important steps paving the way for a stronger democracy in Turkey. However, with the corruption scandal, the on-going graft probe has let us see the horrible face of the AK Party by shedding light upon how democracy has already started to weaken in the hands of the political elites.

Since the Dec. 17 corruption operation, the idea of democracy has been abused as a rhetorical device by the AK Party government to cover up the corruption scandal. Erdoğan has stigmatized all police officers and the prosecutors carrying out the operation as members of a parallel state structure. In this process, the Hizmet movement has been seen as the domestic enemy under the label of a “parallel state” structure and has been placed at the center of accusations, insults and threats. It should also be made clear that the writers, intellectuals and the journalists close to the Hizmet movement have, from the very beginning, called on the government to take legal steps against those whom he constantly labels the “parallel state” so that they could also know who they are. However, the government took no legal steps at all to fight this parallel state. The government removed thousands of police officers labeling them members of the parallel state and did nothing else.

Besides adopting the rhetoric of internal and external enemies, the AK Party government has engaged in making changes to laws to enlarge its room for maneuver while also weakening democracy.

For instance, the recently passed legislation restructuring the Supreme Board of Judges and Prosecutors (HSYK) gives the executive branch much tighter control over the judiciary, which is a major blow to the rule of law. It can be said that if President Abdullah Gül approves this legislation, it will reverse the democratic status given to the HSYK in the 2010 referendum. Apart from that, the Internet bill tightening control of the Internet has deepened concerns about free speech and the rule of law. The new bill gives bureaucrats a considerable degree of power to remove any posting from the Internet in just four hours without the need for a court order.

On the other hand, Prime Minister Erdoğan’s influence on media bosses to dismiss certain journalists is another development which has become apparent recently. The majority of the media is under the control of the government as their financial basis is mainly dependent on the state. In addition to laws, this de facto dependency of the media has increased to an important degree. The phone calls (namely the “Alo Fatih calls”) between Erdoğan and the boss of a media outlet have clearly shown how much pressure has been put on the media by the government. The deportation of Azerbaijani journalist Mahir Zeynalov from Turkey because of his tweets is another sign showing how bad things are for press freedom.

The European Union and non-governmental organizations based in Europe are all aware of how bad the situation has become in Turkey concerning democracy. However, Erdoğan and the spokesmen of the government along with the pro-government media still characterizes the HSYK legislation as a significant step for empowering democracy and the Internet bill as important for protecting the private lives of individuals. As far as the government is concerned, the HSYK law and the recently approved Internet bill contribute to “advanced” democracy and anyone who criticizes or opposes this will be a domestic enemy against this “advanced” democracy. In short, we can say that nowadays Turkish style “advanced” democracy gains its self-declared legitimacy through domestic enemies.