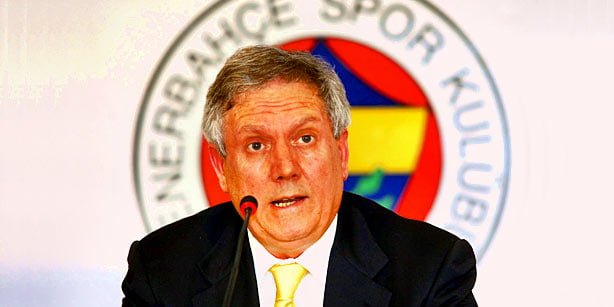 Turkey saw the announcement of a prominent court ruling on Friday regarding a major match-fixing case involving Aziz Yıldırım, chairman of Fenerbahçe, one of the leading football clubs in the country.

The Supreme Court of Appeals upheld the decision of a lower court that sentenced Yıldırım to prison in the case in which several football clubs are involved. Yıldırım, who is accused of fixing games, trying to influence the outcome of matches and leading a criminal gang, was sentenced to six years, three months in prison in 2012. Yıldırım had spent a year behind bars but was released pending the outcome of his appeal. Now he will have to return to prison and step down as Fenerbahçe chairman. The scandal that rocked the reputation of Turkish football hit the media in July 2011, with police raids on football club premises and detentions of 60 people suspected of rigging football matches in two leagues. Top officials of the various clubs, including Fenerbahçe and Beşiktaş had been arrested on charges of fraud and match fixing. The Union of European Football Associations (UEFA) banned Fenerbahçe from European club competition for three seasons and Beşiktaş for one season.

Yıldırım, who was in France when he learned the upholding of his conviction by the Supreme Court of Appeals said he doesn’t recognize the verdict and claimed the case was politically motivated.

Hürriyet daily columnist Cengiz Çandar made a reference to Prime Minister Recep Tayyip Erdoğan’s comments concerning the Yıldırım verdict that he made while speaking to reporters at an airport before leaving for Brussels. Çandar quoted Erdoğan saying: “I consider the timing [of the Supreme Court of Appeals ruling] significant. Why wasn’t it announced before? Why was it announced just before the elections? They could have done it after March 30. This is to confuse people’s minds. I believe that a ‘parallel state’ that dominates the judiciary has taken that step as a result of its delicate calculations.” According to Çandar, Erdoğan was suggesting with that statement that the Hizmet (Service) movement was behind the court rulings against Yıldırım. Çandar wrote: “However, members and supporters of Fenerbahçe are no longer so naive as to buy Erdoğan’s words. … Nowadays, Erdoğan is leading a defamation campaign to black out the truth and to distort the facts through the discourses of ‘parallel state,’ ‘there is no corruption; but a coup’ and ‘international conspiracy’.” Çandar then quoted Yıldırım responding to a question asking if he thinks that the Hizmet movement is behind the case against Fenerbahçe, in an interview he recently gave to the Wall Street Journal (WSJ), saying: “This is not what I think. This is what the prime minister of the Turkish Republic thinks.”

With respect to the upholding of Yıldırım’s conviction, the Vatan daily’s Sanem Altan criticized the stance of the Turkish Football Federation (TFF) in her Wednesday column. Altan wrote: “What kind of a state is it where a court and a federation [TFF] can have such contradicting decisions? And is a football system reliable when it can have completely opposite decisions with the judiciary? … UEFA says ‘the crime has occurred,’ courts say ‘yes, it has’ and rule for conviction, the TFF says ‘no, there is no crime for us’.” Altan also asked, “How can the prime minister label the judiciary as unreliable by attributing the ruling to a ‘parallel state’?”