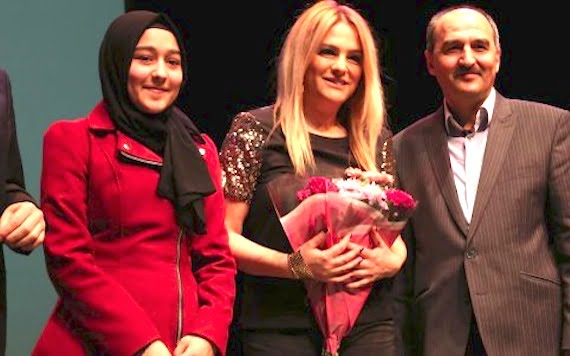 Orhan Erdogan, KYM representative to African continent, and the Turkish pop singer Reyhan Karaca were also in attendance of the event to share their experiences in past initiatives by Kimse Yok Mu.

Karaca said she has been volunteering in KYM’s aid organizations in multiple countries and deeply moved by the impoverished conditions she has witnessed. Speaking of her experiences in Sudan and Somalia, Karaca said, “I was deeply moved to see so many orphans in these countries. I used to see Africans with shoes out of plastic bottles only in pictures. But to see them in person moves you much more. Once, a mother begged me to take her child with me. My emotions climaxed when she said, “Take my child with you and save him from this misery.” It’s hard to truly appreciate without seeing it for yourself.”

Next, Orhan Erdogan briefed the audience on KYM’s various projects including cataract surgeries, water wells, orphanages, hospitals and soup kitchens in Africa and encouraged them to contribute through Time to Help campaigns.

Erol Tosun, Director of Time to Help in England, introduced the foundations campaign “Sanki Yedim” which translates as “As if I ate”. Tosun said their projects are based on the premise “Human has goodness in his essence.” He further gave a presentation along with a promo video on their past and future projects.

Fethullah Gulen dearly paid the cost of this truth-telling with many false allegations followed by years of trials and tribulations. Similarly he did not mind being politically incorrect when he raised his voice about the ongoing governmental corruption. Without violating the presumption of innocence, he said these allegations should be investigated thoroughly, and whether wrongdoers are affiliated with a political party or the Gulen movement, should be brought to justice.