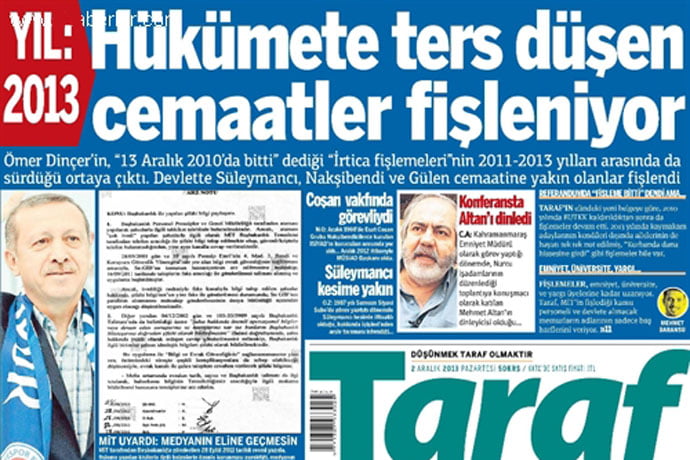 Human rights advocates and legal experts have voiced their uneasiness about claims suggesting that the ruling Justice and Development Party’s (AK Party) has profiled individuals whom it believes to be followers of certain religious and faith-based groups, describing the practice as being illegitimate and a violation of human rights.

According to a report published in the Taraf daily on Monday, the government’s profiling of individuals and its monitoring of their activities did not end in 2010 as previously claimed, but it continued between 2011 and 2013. Those mainly profiled are reportedly followers of the Hizmet movement, a faith-based movement inspired by Turkish Islamic scholar Fethullah Gülen. The daily also claimed that other religious groups that voiced criticism or disapproval of the government’s activities were also profiled, mainly civil servants or those who planned or hoped to be employed in a state post.

Turkey is used to hearing news about profiling of individuals according to their religious and ideological backgrounds because of the days of the Feb. 28, 1997 military coup, when the Turkish military forced a coalition government to resign on the grounds that there was religious fundamentalism in the country. However, the continuation of such a practice during the rule of the AK Party government, which has pioneered many democratic reforms in the country, has been received with suspicion and disappointment.

Üstün Bol, deputy head of the Association of Human Rights and Solidarity for Oppressed Peoples (MAZLUM-DER), said no matter what reason the profiling of individuals was done under, his organization finds it “unacceptable.” He said that an illegitimate structure within the state has surrounded all state mechanisms like an octopus, despite government changes following the Feb. 28 coup, and it has retained its existence for a long while.

“No matter when or by whom they are carried out, MAZLUM-DER is against all human rights violations. It is the debt of all of us to have the conscience of a Muslim and oppose this injustice not only when ‘we’ or ‘those from us’ are profiled but also when others are profiled in cooperation with ours. We think it is a moral obligation not to be one of those who sometimes turns a blind eye to these violations and to sometimes raise [our] voices against them in accordance with the circumstances,” he told Today’s Zaman.

He also called on the government to destroy the documents of those profiled and offer an apology to the people who have been profiled.

According to the Taraf report, many individuals were blacklisted for various reasons, such as making Eid al-Adha donations; reading Risale-i Nur, a multiple-volume commentary on the Quran; staying at dormitories owned by religious groups; or just on the suspicion that those individuals may be linked to religious groups.

Freedom Association (Özgür-Der) President Rıdvan Kaya was also critical of the government’s involvement in the profiling of individuals, saying that the practice is “saddening” and “astonishing” in 2013’s Turkey.

“The government should take the opportunity to see its shortcomings over this incident and it should make a convincing statement to the public. The profiling of individuals is not only a crime but it also gives significant damage to the government’s credibility in the eyes of the public,” Kaya said in further remarks.

When asked about the profiling allegations following a Cabinet meeting on Monday, deputy Prime Minister Bülent Arınç failed to make a clear statement on the issue.

On Tuesday, main opposition Republican People’s Party (CHP) deputy group chairman Akif Hamzaçebi also called on Prime Minister Recep Tayyip Erdoğan to provide an explanation to the claims that his government was involved in the profiling of individuals.

Speaking at a news conference at Parliament, Hamzaçebi said: “Today, civilians should not talk about the virtues of democracy in Turkey by perpetuating the controversial practices of the military. Erdoğan has been clearly revealed as person who is not pro-democracy. It has also been clearly revealed that Erdoğan’s government profiled people just like during the days of the Sept. 12 [1980] and Feb. 28 military coups. Although they say those MGK [National Security Council] decisions are ‘null and void,’ this has nothing to do with facts.”

The report in Taraf was part of a series of leaks the daily has published in the past few days revealing a MGK document that asks the government of Prime Minister Erdoğan to curtail the activities of Gülen, both in Turkey and abroad. The document, endorsed in 2004, was signed by a number of officials, including Erdoğan, then-Foreign Minister Abdullah Gül and then-Justice Minister Cemil Çiçek.

Legal experts who approached the issue of the state keeping records on individuals’ private and personal information, said the practice is a crime according to Turkish Penal Code (TCK) and the Constitution.

Faik Tarımcıoğlu, a former military prosecutor and judge, told Today’s Zaman that amendments made to the 135th Article of the TCK in 2005 and to the Constitution in 2010 make profiling of individuals a crime.

“The state keeping records of personal information, if they are not for statistical and categorical data but about one’s private life, is certainly a crime,” he said, adding that such behavior from the state has continued since the Feb. 28, 1997 postmodern coup, when individuals were categorized by the state according to their ideological and religious backgrounds.

Hakan Hakeri, dean of the Faculty of Law at Medeniyet University in İstanbul, also said the profiling of individuals is a violation of Article 135 of the TCK and the Turkish Constitution.

TCK Article 135 says individuals who record the personal information of others illegally will be sentenced to six months to three years in jail.

“In 2010, the Constitution was amended to protect private personal information. The TCK was already protecting this. Profiling individuals means the violation of both,” Hakeri said.

Turkey held a referendum in September 2010 on a package of government-sponsored constitutional reforms, which was approved with overwhelming support by the nation.

The government claims the MGK decisions are just advisory and not binding, so they were not put into practice.

In the meantime, key Feb. 28 suspects — such as former Chief of General Staff Gen. İsmail Hakkı Karadayı and retired Gen. Çetin Doğan, who are standing trial at an Ankara court — provided the MGK’s 2004 decisions as grounds for an acquittal at the 41st hearing of the trial on Tuesday.

Submitting a petition to the court, Karadayı’s lawyers said educational institutions, foundations and some other groups were under the military’s monitoring during the days of the Feb. 28 coup, not to stage a coup but to protect secularism.

“The MGK decision suggests that the monitoring of activities of the Fethullah Gülen group by the Prime Ministry Implementation Monitoring and Coordination Council [BUTKK] overlaps with the MGK decisions made on Feb. 28, 1997,” the petition read and also requested Karadayı’s acquittal in the trial.

The decisions made at the MGK meeting on Feb. 28, 1997 and signed by then-Prime Minister Necmettin Erbakan were interpreted by many at the time as military interference, thus inhibiting the basis for democracy.

Retired Gen. Doğan also requested his acquittal through his lawyer on Tuesday using the same grounds and said that all he did was to implement the decisions of the MGK dated Feb. 28, 1997.

*Öner Yiğit from İstanbul contributed to this report.