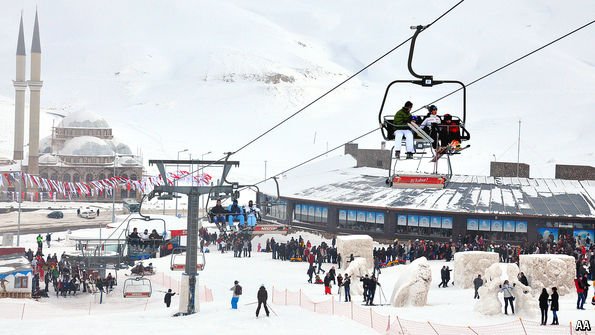 Once among the country’s most dynamic entrepreneurs, the “Anatolian Tigers” are having their firms confiscated.

THE snow on Mount Erciyes sparkles in the early afternoon sun. The skiing on this volcano nearly 4,000 metres high is among the best in Turkey. At the bottom of one slope, a group of secular Turks dance and drink beer outside a new hotel. On the other, alcohol-free, side of the mountain, local families and Arab tourists drink tea. The entrance to a nearby mosque is littered with ski boots; young women in headscarves pelt each other with snowballs.

Down the mountain in Kayseri, the view is considerably bleaker. Not long ago, this industrial city was touted as the birthplace of the Anatolian Tigers, a generation of conservative businessmen who helped create Turkey’s economic boom in the 2000s. Today many of the Tigers are behind bars in the mass arrests that followed an attempted coup last July. The boom is over. Exports from the region have fallen by at least 4% over the past year. Investment has dried up. For the local economy to recover, says Mahmut Hicyilmaz, head of Kayseri’s chamber of commerce, “our industrialists and our investors need a sense of security.”

They do not have it. Roughly 40,000 people have been arrested across Turkey since the summer, and an increasing number are businessmen, from construction magnates to owners of chains of baklava stores. Their crime, say prosecutors, was to have bankrolled the Gulen movement, a religious sect accused of masterminding the coup. Armed with emergency powers, the government of President Recep Tayyip Erdogan says it has taken over more than 800 companies worth a combined $10bn since July. A court in Istanbul recently confiscated the assets of dozens of writers and journalists arrested because of suspected Gulenist sympathies. Officials say they are fighting the financing of terrorism. Critics call it state-sanctioned plunder.

A binge of purges

In Kayseri, scores of entrepreneurs—including the heads of Boydak Holding, the region’s biggest employer—have been arrested for financing Gulenist banks, schools and foundations. Boydak, which owns three of Turkey’s biggest furniture companies, has been seized by the state. More than 60 businessmen face terrorism-related charges. Some have fled abroad. Mr Hicyilmaz himself was detained for over two weeks last August. The worst-kept secret in town, says a local shopkeeper, “is that nearly everyone here was in business with the [Gulenists] at one point or another.” The other open secret is that they were once encouraged to so by Mr Erdogan’s government. The ruling Justice and Development (AK) party had been the Gulenist movement’s biggest cheerleader for nearly a decade. Their alliance collapsed in 2013 after AK accused Gulenists inside the bureaucracy of engineering a corruption scandal that involved some of Mr Erdogan’s closest associates.

At the sprawling industrial zone outside Kayseri, business appears to go on as usual. Employees at one Boydak factory say they have not been affected by the takeover. At a number of other companies seized by the state, however, production has stalled. “These seizures are catastrophic,” says Seyfettin Gursel, the head of Betam, an economic think-tank in Istanbul. “There’s no definitive court decision, and no legal process.” Officials say that owners will get their companies back if they are cleared of terrorism charges, but analysts fear most firms will be auctioned to Mr Erdogan’s loyalists.

Though the purge has homed in on alleged Gulenists, it has spread uncertainty through the economy. Ulker, a food giant, saw its shares plummet after a pro-government columnist suggested it may have ties to the movement. One of the country’s biggest conglomerates, the Dogan group, suffered a similar fate after police detained several of its executives. Emergency rule is eroding belief in property rights and the rule of law, says Ozgur Altug, chief economist at BC Partners in Istanbul, a brokerage. Businesses are reluctant to work with new suppliers. “I might want to make a deal with you, but I don’t know if the government will seize your assets the next day,” says Mr Altug.

All this puts additional pressure on an economy already weakened by terrorist attacks, the war in neighbouring Syria and growing corporate debt (see article). GDP in the third quarter of 2016 was down 1.8% from a year earlier, though it is thought to have rebounded modestly in the fourth. The lira has lost about a fifth of its value against the dollar since November. That makes it harder for Turkish companies to service the dollar-denominated debts with which they are laden. The central bank could defend the lira by raising rates, but Mr Erdogan has pressured it to keep them low, forcing it to resort to more complex and less effective mechanisms. Foreign investment has fallen by nearly half since 2015.

The political backdrop is not reassuring. On January 21st parliament adopted a block of constitutional amendments intended to cement Mr Erdogan’s grip over the country. The changes would dismantle Turkey’s parliamentary system by abolishing the office of prime minister, transforming Mr Erdogan’s 1,100-room palace into the centre of all executive power, and allowing the president to handpick ministers and MPs. The entire package will be put to a referendum in April.