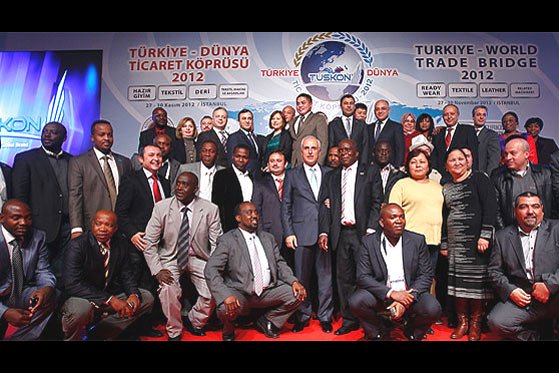 Hundreds of businessmen from all around the world attended the opening ceremony of the Turkey-World Trade Bridge 2012 held by TUSKON in İstanbul on Tuesday. The event will start on Wednesday. (Photo: Today's Zaman, Hüseyin Sarı)

The Turkish Confederation of Businessmen and Industrialists (TUSKON) has organized another Turkey-World Trade Bridge summit, to be held in İstanbul starting Wednesday as nearly 2,000 businessmen from all around the world fly in to attend.

Turkish businessmen from a number of sectors, including textiles and machinery, among others, will engage in private meetings with their counterparts from the Balkans, the Americas, Asia, Africa and Asia-Pacific to sign business deals.

MARY FITZGERALD, Addis Ababa “MERHABA! MERHABA!” – the Turkish greeting echoes through the school corridor as neatly uniformed Ethiopian children welcome a visitor.That morning the children sang the Turkish national anthem along with their own. On the school walls, vocabulary charts to help pupils improve their command of Turkish hang alongside framed verses of Rumi’s […]