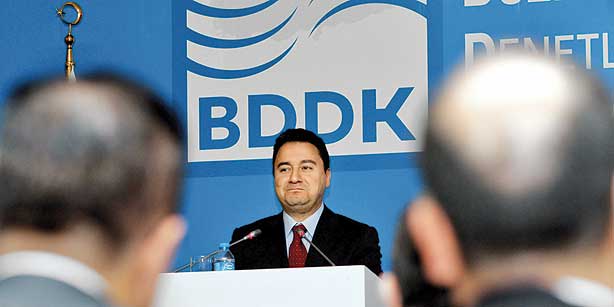 As the government intensifies its efforts to disparage the judiciary for deliberately working to undermine the AK Party’s power and has sought refuge in a discourse of a “parallel state” on the one hand, on the other it uses regulatory agencies to come down on certain media outlets, people, firms and banks which it perceives as “traitors” and the voluntary instruments of foreigners aiming to destabilize the country.

“In the absence of the rule of law, the government, which has seized all power, has exploited all state [regulatory] institutions for the sake of its interests,” Mehmet Altan, a professor at İstanbul University’s department of political economy, told Today’s Zaman.

Stressing that although the manipulation of state agencies has always been a fact in politics, Altan said the exploitation of those agencies by the government today has reached an unprecedented level.

One of the most offensive attacks by the government after the corruption scandal became public was found to have been on the banking front. The government started a defamation campaign to deliberately bankrupt Bank Asya using Turkey’s banking watchdog as a means to this end.

Ankara’s operation was described in the Taraf daily as the first example in the world of a government deliberately attempting to bankrupt a bank in its own country. Based on the content of phone conversations, the Taraf daily noted on Jan. 15 that Turkish Airlines (THY) Chairman Hamdi Topçu had ordered a massive withdrawal of cash, reportedly around $300 million all at once, from the bank. THY withdrew its money from its account despite incurring costs for withdrawing funds earlier than the maturation date.

The Banking Regulation and Supervision Agency (BDDK) did not take any concrete steps to protect Bank Asya, except for a statement warning aggressors and reminding them of the possible repercussions they may face, even though it is the BDDK’s mission to take immediate steps and initiate legal procedures against any individuals or publications that systematically organize attacks against banks. Similarly, the Capital Markets Board (SPK) only denounced the organized attacks.

More recently, three high-level bureaucrats were discharged from their positions at the BDDK right after it initiated an internal investigation into an illegally wiretapped telephone conversation in which a Bank Asya employee said some people in the BDDK had assisted in a government-led assault against the bank by forcing some state companies to withdraw their deposits.

Article 74 of the Banking Law clearly states that any action or words that may harm banks’ reputation are strictly forbidden. It states that stories cannot be spread through any media instruments or electronic devices in a way that can damage a bank’s reputation or assets. Article 158 notes that those who commit a felony according to Article 74 are punishable by one to three years in prison and a punitive daily fine ranging between 1,000 and 2,000 days. If the action causes material losses to a private or public company as opposed to a bank, then the penalties are increased by one-sixth, the article states.

A report in the Taraf daily verified the government’s intention to sink the bank in response to the corruption and bribery investigation, which Prime Minister Recep Tayyip Erdoğan claims is a coup against his government and Turkey. He has declared a full-fledged war against a so-called parallel state, which Erdoğan believes is a clandestine part of the Hizmet movement, inspired by Turkish Islamic scholar Fethullah Gülen.

Some other state institutions, including the Settlement and Custody Bank Inc. (Takasbank) of the Borsa İstanbul (BİST), followed suit by withdrawing as much as TL 600 million of their capital to reduce Bank Asya’s liquidity and hence push it into troubled waters. Taraf asserted that the BDDK would then confiscate the bank and appoint a custodian to manage it, which is unprecedented in the country’s history. During the economic crisis of 2001, 21 banks collapsed, incurring a total loss of $47 billion and further deepening the crisis.

The plan to force Bank Asya into bankruptcy was first put into action during the early days following the publicizing of the corruption investigation. Rumors had it that the BDDK assigned inspectors to carry out an in-depth analysis of the bank’s accounts to find something irregular so that it could impose fines on it. In the following days, spin doctors in pro-government media outlets started churning out fabricated stories about the bank, which the bank tried to refute while at the same time waiting for the BDDK to step up and put an end to the smear campaign, but to no avail.

Interior Minister Efkan Ala’s claims on a TV program followed. Without naming names, he said he had solid evidence that a bank had bought up dollars from the market a few days before the police raids and made a profit of over $2 billion when the price of the dollar spiked after the operation.

The pro-government media leapt at this claim, connecting it to Bank Asya, ignoring respected analysts’ comments that this was by definition impossible since a bank needed to have at least $30 billion in assets in order to make a profit of about $2 billion, given the dollar’s value during the period in question.

Bank Asya had to disclose a list of all its currency transactions prior to Dec. 17 to disprove the claims, and central bank figures later proved that the assertion was libel, revealing that no bank had procured extraordinary amounts of greenbacks from the market.

Even in this atmosphere, the BDDK and the SPK opted to remain silent, allowing government supporters to discredit the bank up until Jan. 10, when the bank finally rescued itself from the financial strain it had been pushed into since the massive cash withdrawals.

“[Those institutions] have become institutions at the service of the ruling party,” Cengiz Aktar, the head of Bahçeşehir University’s European Union Affairs program, told Today’s Zaman.

Commenting on government’s increasing influence on state regulatory institutions and using them to mete out punishment, Aktar said that while the sole raison d’être of those bodies is to be independent of government influence, complying with the government’s orders creates serious problems in the functioning of those institutions.

The Radio and Television Supreme Council (RTÜK), another regulatory body, imposed fines on those TV channels that broadcasted visuals of shoeboxes, bankrolls and prosecutor’s documents in news related to corruption and bribery allegations.

After a meeting on Thursday, members of the RTÜK decided to impose fines on certain broadcasting institutions for attacking people’s reputations, invasion of individuals’ privacy and lack of objectiveness using exaggerated visuals and audio effects during their broadcasts and influencing judicial procedure.

It was reported that five members representing the AK Party voted in favor of the fines while representatives of the opposition in the RTÜK have lodged a statement of opposition.

Simultaneous operations were launched on Dec. 17 as part of a major investigation into alleged bribery linked to public tenders. Fifty-two suspects, including the sons of three ministers, bureaucrats and prominent businessmen, were detained. Halkbank General Manager Süleyman Aslan was among those detainees. The police found TL 4.5 million concealed in shoeboxes in Aslan’s home library during the raid on Dec. 17.

On another front, the Turkish Petroleum Refineries Corporation (TÜPRAŞ), one of the country’s largest oil distributors owned by Koç Holding, faced TL 412 million in fines for abusing its monopoly in pricing, Turkey’s competition watchdog announced on Friday.

On Dec. 5, the Energy Market Regulatory Agency (EPDK) launched an investigation into TÜPRAŞ to ascertain whether the firm had been selling gasoline and diesel without markers — chemical substances that fuel distributors are required to add to their product to verify its quality. The investigation stirred speculation that the company had run afoul of the authorities, as some observers saw the previous audit as the result of tension between the government and TÜPRAŞ’s owner, Koç Holding, Turkey’s largest conglomerate.

The search led to speculation and questions over the timing of the raid as it came after Erdoğan’s stern warnings to a number of business groups that opened their hotels to protesters who escaped from the police during the Gezi Park protests in İstanbul’s Taksim Square. Erdoğan signaled that the owners of Divan Hotel, which became a shelter for protesters who clashed with the police, would pay for their stance once the protests were over.

TMSF seized the assets of CHP candidate for İstanbul

Meanwhile, the Savings Deposit Insurance Fund (TMSF) seized the assets of Mustafa Sarıgül, the İstanbul mayoral candidate of the main opposition Republican People’s Party (CHP), after he and his business partners failed to repay a loan dating back to 1998, an official said on Friday.

Vahap Coşkun, a professor of law at Diyarbakır’s Dicle University, told Today’s Zaman that the timing of the TMSF’s seizure of Sarıgül’s assets for the failure to repay loans dating back 16 years ago raises questions about the aim of the operation.

“If the TMSF does not clear the air [about its recent activities], it will create further concerns over its future activities,” Coşkun added.

In his first comment on the seizure, Sarıgül also questioned the timing of the move, claiming that the seizure was politically motivated and aims to disrupt his bid for the İstanbul mayoral post.

“They will get their answer on March 30, the day of the local elections,” Sarıgül said, insisting that he has no debts with the bank, calling on TMSF officials to hand over documents proving his debt.