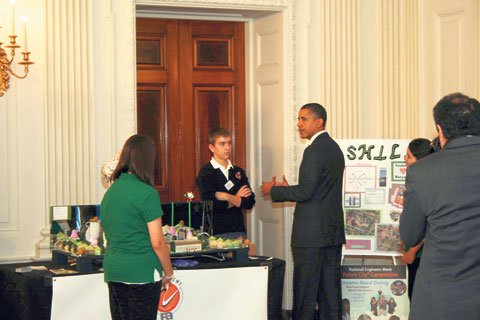 Four students from the Pinnacle Academy, established by Turkish entrepreneurs in the greater Washington, D.C., area, were at the White House on Monday to present their project, which took first place in the National Engineers Week Future City Competition in the capital’s metropolitan area in February.

On Monday President Barack Obama hosted the White House Science Fair to honor the winners of a series of competitions in science, technology, engineering and mathematics.

At the fair, Obama viewed winning student projects and took the time to congratulate the students on their hard work and stressed the importance of technology and engineering in middle school education.

Eighth grade students Zehra Yılmaz, Selin Altıntaş, Nurbanu Şimşek and Madina Khurishanova from the Pinnacle Academy in Oakton, Virginia, represented Washington, D.C., at the 2010 Future City Competition National Finals. The team developed a digital and three-dimensional model of Yeshilist, an imaginary city that anticipates the accommodation needs of citizens who lose their homes during an earthquake. “Yeshilist has solar panel roofs, wind-powered community centers, cork brick homes and cable trains made of Lego pieces that are scattered around the city. The National Engineers’ Week Future City Competition promotes engineering as a creative profession by challenging middle school students to design their vision of the city of tomorrow through computer simulation and a three-dimensional model.

Original story was publish on Today’s Zaman on 21 October 2010, Thursday at http://www.todayszaman.com/news-224954-104-obama-meets-turkish-schools-award-winning-students.html

The celebration was announced on White House official web site as well: http://www.whitehouse.gov/the-press-office/2010/10/18/president-obama-host-white-house-science-fair

The new Turkish film “Selam” had its premiere Wednesday night in İstanbul and was welcomed by moviegoers. Turkish celebrities and politicians including EU Minister Egemen Bağış and former national football player and deputy Hakan Şükür watched the movie along with a large crowd. “Selam” tells the impressive stories of three Turkish teachers who are idealists […]