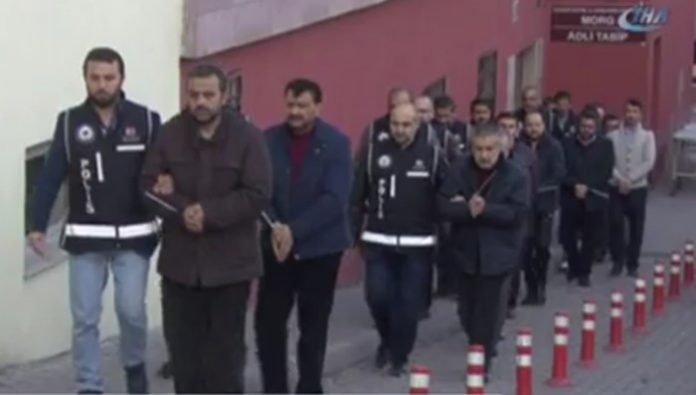 Twelve businessmen have been detained in Kayseri province for raising humanitarian relief for families of people jailed in an ongoing crackdown on the Gülen movement, which the government accuses of attempting a military coup on July 15, 2016.

The detainees — Hanifi Y., Muaz B., Mehmet A., Altan A., Hacı Ali D., Mahmut A., Mustafa A., Selçuk A., Fuat G., İbrahim Ş., İhsan Y. and Ali K. — were taken to the Kayseri Police Department for further interrogation.

According to the Milliyet daily, police detained the “suspects” at a meeting during which they were raising funds for victimized families.

Turkey experienced a military coup attempt on July 15 that killed over 240 people and wounded more than a thousand others. Immediately after the putsch, the AKP government along with President Erdoğan pinned the blame on the Gülen movement despite the lack of any evidence to that effect.

Although the Gülen movement strongly denies having any role in the putsch, the government accuses it of having masterminded the foiled coup. Gülen called for an international investigation into the coup attempt, but President Erdoğan — calling the coup attempt “a gift from God” — and the government initiated a widespread purge aimed at cleansing sympathizers of the movement from within state institutions, dehumanizing its popular figures and putting them in custody.

A total of 7,316 academics were dismissed as 4,070 judges and prosecutors were purged over alleged coup involvement or terrorist links. (TURKEY PURGE)