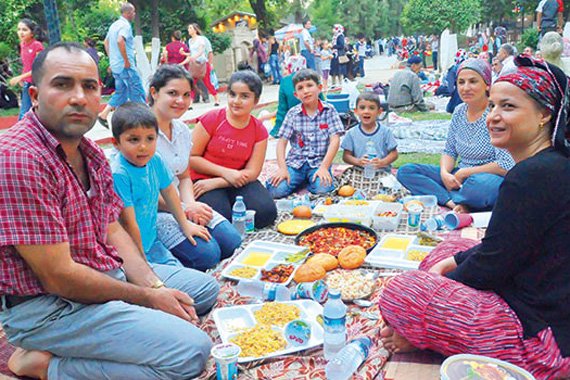 Ramadan brings peace, mercy and blessings to the society. One good example if this was an iftar in Antioch, Turkey, where Alevite and Sunni Muslims, Jews, and Christians came together.

Antioch has been remembered because of terrorism and some political incidents in the city. However, Alevites and Sunnis, Christians and Jews broke bread at the same table in Ramadan. The theme of the dinner was “Antioch at the same table.” In the atmosphere of tolerance all said “Amen” for prayers for peace, friendship and brotherhood.

Antioch Intercultural Dialogue Association (AKADIM) and Mayor’s Office co-hosted the program. Minister of Justice Mr. Sadullah Ergin expressed his gratitude for being at the same table with people of Antioch. Mr. Ergin, wishing that all unfortunate incidents would end in this region and in the world, said, “Ramadan is the month of brotherhood and sharing. We refresh such values in our hearts in this month and prepare ourselves for future. I pray to God that friendship and brotherhood and peace may strengthen in this city and in our country.” Mr. Ergin also offered his prayers for bloodshed and tears to end everywhere in the world.

People in attendance underlined that they felt more spiritual in Ramadan thanks to this and such programs.

Antioch is famous for brotherhood!

AKADIM president Isa Aydın expressed his pleasure as all colors of Antioch were together at the Iftar. He said, “This is the best answer to some negative incidents happened recently in the city.” He also said that Ramadan is the month of peace, sharing, caring the poor and knowing each other closely; AKADIM invited to the dinner all colors of Antioch namely, Alevites, Sunnis, Christians and Jews in this holy month when spirituality peaks. “This is real Antioch where people have the culture of living together,” he remarked.

“Antioch is famous for brotherhood, Antioch is land of friendship and peace,” he lauded.

İPEK ÜZÜM, İSTANBUL The government should take a more active role in preventing domestic violence — which is on the rise across Turkey and the world — stated the final declaration of the conference on violence and society organized by the Journalists and Writers Foundation‘s (GYV) Women’s Platform between Nov. 24 and 26 in İstanbul. […]

Father Thomas Michel in his new book titled “Peace and Dialogue in a Plural Society: Contributions of the Hizmet Movement at a Time of Global Tensions” explores how Fethullah Gulen and his movement are one of those voices speaking most vocally in favor of a world community, where different faiths and nations can come together at one table to solve the multitude of problems facing today’s world.