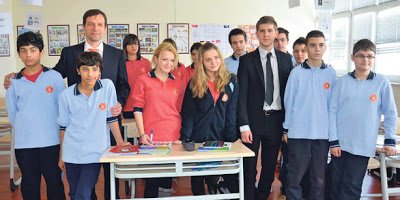 Graduates of Turkish schools in Bosnia are now working as teachers at the schools they attended as students.

The court’s final ruling comes at a time of increased pressure by Turkey on its allies to deport people believed to be linked to schools financed by Fethullah Gülen, whose movement Ankara has declared a terrorist organization.

Ankara accuses Gülen, a US-based Muslim cleric, of orchestrating the July 15, 2016 coup attempt. He denies any connection with the putsch.

The Appeals Chamber of Bosnia’s state court last month ruled against the extradition of Hümeyra Gökçen on the grounds that she had requested asylum in Bosnia before Turkey had asked for her extradition. The ruling was not made public.

In the decision obtained by Reuters, the court also said that allegations that Gökçen was a member of a terrorist organization could not be sustained because the F..O organization has not been verified as such by resolutions of the United Nations or the Council of Europe.

F..O is a pejorative term coined by the Turkish government to refer to the Gülen movement.

The court did not provide more details on the case nor did it comment on whether there were other such requests for deportation.

But a source close to the matter confirmed to Reuters on Monday that Turkey has requested the extradition of several more people who arrived in Bosnia after the coup attempt over links to the schools believed to be financed by the Gülen movement.

Even though Bosnia has taken no concrete steps against these schools, some Turkish teachers have left the country under political pressure since the failed coup.

Last month, during his visit to Sarajevo, Turkish Prime Minister Binali Yıldırım said that more action should be taken against Gülen’s followers there, “especially in the sectors of education and business.”

At its peak, the Gülen movement operated schools in 160 countries, from Afghanistan to the United States. Since the coup attempt, Turkey has pressured allies to shut down Gülen-run establishments.

President Recep Tayyip Erdoğan and his ruling Justice and Development Party (AKP) government pursued a crackdown on the Gülen movement following corruption operations in December 2013 in which the inner circle of the government and then-Prime Minister Erdoğan were implicated.

Erdoğan also accuses the Gülen movement of masterminding a failed coup attempt in Turkey on July 15, 2016.

Despite the movement strongly denying involvement in the failed coup, Erdoğan launched a witch-hunt targeting the movement following the putsch.

Interior Minister Süleyman Soylu on April 18 said the total number of people who were arrested over their alleged ties to the Gülen movement between July 15, 2016 and April 11, 2018 is 77,081.

Soylu said on Dec. 12 that 234,419 passports have been revoked as part of investigations into the movement since the failed coup.

On Nov. 16 Soylu had said eight holdings and 1,020 companies were seized as part of operations against the movement.

The number of people who have been investigated for alleged ties to the faith-based Gülen movement reached 402,000 in March, the state-run Anadolu news agency reported on March 15.