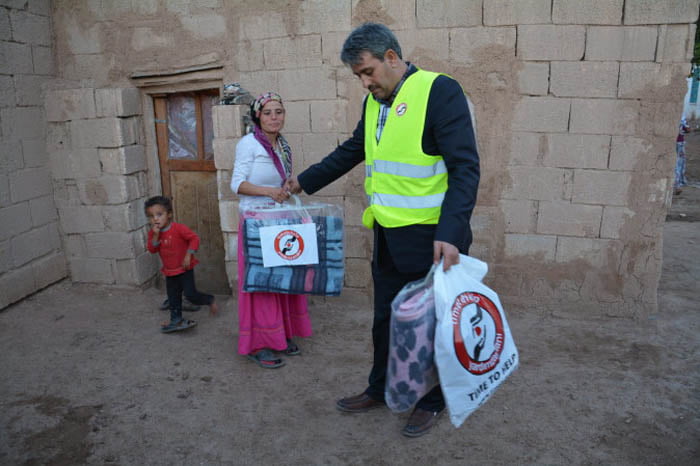 Denmark’s Time to Help charity, reaching out to millions in need around the globe, initiated a aid campaign for Syrians.

The Syrians seeking refugee for over two months now in the southeastern Turkish city Suruc, Sanliurfa, from the ISIS AND PKK/YPG fight in the region received food and clothing assistance from the two foundations. The volunteers handed the donations of one tone of meat, 500 packages of staples, 850 blankets and hundreds of shoes to the needy living in harsh conditions in Suruc and neighboring villages. The refugees were grateful for the donations that arrived in winter when it’s most needed.

Time to Help president Mehmet Bayhan said they feel happy to have teamed up in a campaign with KYM. “We’ve witnessed despair, famine and destitution that the people in Denmark would never imagine. Glad that we’ve come all the way to extend a hand to our brothers and sisters here.

“It was heart wrenching to see the refugees having nothing but only a rug to lie on when we visited their shelters. It’s great that KYM identified addressed of those in need and has been periodically assisting them. Our joint aid campaigns will hopefully continue.”

Likewise, KYM Sanliurfa director Fevzi Sahin said, “We’ve been continuously assisting our Syrian brothers for nearly five years anyway. However, this joint campaign has motivated us even more. We handed the aid packages to the refugees going from door to door, regardless of the rough weather conditions. God will definitely remember the donations of the giving Turkish people.”

Speaking of the recent Cabinet decision rescinding KYM’s right to collect charity donations and the Council of State’s reinstatement, “It’s promising for these devoted donors to see justice still done despite all the oppression in the country,” Sahin said.

Published [in Turkish] on Arca Ajans.