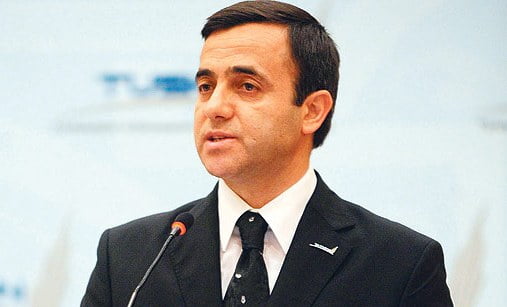 “Politics is a platform where you serve people. It is not a spot to make money or build a fortune. Businessmen are calling those who tell non-governmental organizations (NGOs) to form a political party, to get into business world to make money,” Meral said.

One of Turkey’s most influential business confederations, the TUSKON, was threatened with being “wiped off the market” by the government after TUSKON made critical statements about government policies, chairman Rızanur Meral told the media on Friday.

Wall Street Journal (WSJ) Turkey quoted Meral as saying on Friday that “different government figures, including Prime Minister Recep Tayyip Erdoğan, warned [that it would] do away with TUSKON unless it cut relations with certain groups critical of the government.” Meral was speaking in an interview with the WSJ Turkey on the sidelines of a Turkey-Africa Business and Investment Council meeting in İstanbul.

Meral’s comments are no surprise to those familiar with Erdoğan’s efforts to clamp down on his critics. Continuing government pressure and an alleged smear campaign against Turkey’s largest Islamic group, the Hizmet movement, which TUSKON is affiliated with, has seen leading business figures receive threats from government and its supporters. Erdoğan alleges that the Hizmet movement is working to undermine his political power, but he has provided no sound evidence to prove his claim. The Hizmet movement has so far dismissed all claims fabricated by the pro-government media and used by Erdoğan as “baseless.”

“Companies close to the Hizmet movement were contacted by some top government figures — by Erdoğan in person in certain cases — and they received threats to cut relations with the movement. Key figures from the National Intelligence Organization [MİT], the Finance Ministry and even business confederations like us visited TUSKON member companies to give them a warning,” Meral told the WSJ Turkey. The paper said the Ministry of Finance denied the claims and that the ruling Justice and Development Party (AK Party) was not immediately available to comment on the issue.

“Yes, we are under intense political pressure; however, TUSKON members are not afraid of these threats. Instead, they have doubled efforts to boost new investment and charity projects,” Meral said. The chairman said they have faith that the current oppression will eventually come to a halt and leading business confederations like TUSKON and the Turkish Industrialists and Businessmen’s Association (TÜSİAD) will survive to serve Turkey. “Political figures and the government are temporary, but such organizations as TUSKON will continue to serve the Turkish people for a long time,” Meral concluded.