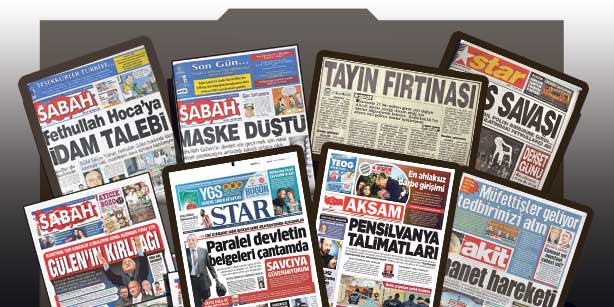 According to independent deputy İdris Bal, what Turkey has been experiencing recently is indeed a state crisis, in other words a coup, as in the case of Feb. 28. “There is no longer a separation of powers. There is no separation between the executive and the legislative; the two powers are acting together. In addition the judiciary is being controlled by the executive. If there is an investigation or operation into corruption claims in a democratic country, the prime minister is expected to allow the judiciary to freely examine the alleged corruption. But what is happening in Turkey is just the opposite,” he stated.

While the Feb. 28 coup targeted a large conservative community, today’s anti-democratic practices directly target the Hizmet movement, a faith-based group inspired by Turkish Islamic scholar Fethullah Gülen. Many businessmen and some media groups have been discriminated against on the grounds that they are members of or are sympathetic to the Hizmet movement.

The sons of two former ministers are among 24 high-profile names, including some government officials and businesspeople, who were arrested in mid-December on corruption and bribery charges as part of the investigation. Several other government figures were reportedly implicated in corruption and fraud as well.

When the corruption investigation erupted, the prime minister sought to discredit the investigation by calling it a “foreign plot” and “an attempt to damage the government made by a parallel state nested within the state,” in a veiled reference to the Hizmet movement. He said the parallel state was seeking to topple his Justice and Development Party (AK Party) government. He vowed to fight against the Hizmet movement, saying the government would “come down to their caverns and tear them to shreds.”

Since then, some pro-government dailies have been contributing to a black propaganda campaign initiated by the government against the Hizmet movement. For instance, the movement is referred to as a “gang” both by the prime minister and the dailies. Some 3,000 civil servants, including police officers and members of the judiciary, have been removed from their posts due to their closeness to the Hizmet movement. In addition, some popular columnists have been sacked for writing pieces critical of the government.

Nationalist Movement Party (MHP) deputy Özcan Yeniçeri also likened the anti-democratic practices of today to those experienced during the Feb. 28 coup. He said the government deviated from its democratic identity after its third consecutive election victory and turned into a bureaucratic structure that looks down on the people.

“Looking at what is going on today. We see that things are not different from Feb. 28. No coup perpetrator has praised corruption, bribery or theft. However, the prime minister is doing this. He is protecting the people who were arrested on corruption charges, and he is ordering the courts to protect them, too,” the deputy complained.

Mehmet Şeker, a deputy for the Republican People’s Party (CHP), stated that Turkey is witnessing the same things today that it did in the Feb. 28 period. “What we are witnessing today is not democracy. It is damaging our country. Remember that we said the military made a mistake [by staging a coup] on Feb. 28; we should say the same for the government today. Prosecutors are being removed from their posts and so are police officers. People are being profiled,” he said.

Comparisons between Feb. 28 and today

What follows is a brief comparison between today’s anti-democratic practices and those witnessed in the run-up to Feb. 28.

Feb. 28: Former Chief Public Prosecutor of the Supreme Court of Appeals Vural Savaş referred to religious people as “vampires,” “blood drinkers” and “a malignant tumor” in an indictment he prepared to have the conservative Virtue Party (FP) shut down by the Constitutional Court on the charge that the party was seeking to place Turkey under Islamic rule. He also claimed that members of religious fundamentalist movements had infiltrated government institutions.

Today: A similar campaign is under way against the country’s religious citizens. The prime minister has, on various occasions, referred to members of the Hizmet movement as a “gang,” “criminal group,” “parallel state,” “virus,” “cave dwellers” and “secret organization.” He even likened the movement to the Hashishin, a shadowy group that carried out politically motivated assassinations during the rule of the Seljuk Empire.

Feb. 28: Many conservative businessmen faced economic sanctions and boycotts during the Feb. 28 period. State banks refused to give loans to those businessmen’s companies. Some of them went bankrupt.

Today: Companies belonging to businessmen affiliated with the Hizmet movement are being targeted in a similar operation. The most concrete example is Bank Asya. Claims emerged that the bank benefited from the steep rise in the value of the US dollar when the corruption investigation affected Turkish markets. According to the claims, the bank made a profit of $2 billion by purchasing large quantities of US dollars prior to the corruption operation. However, commentators said the bank would have needed to purchase $34 billion in order to make $2 billion in profits. The assets of the bank, however, stand at $15 billion.

In addition, the government has recently targeted the companies of Akın İpek, a businessman known for his support for the Hizmet movement. The activities of gold mining company Koza Altın A.Ş., owned by İpek, were halted in late December.

Feb. 28: Thousands of members of the military, police force and judiciary were fired for arbitrary reasons. They faced accusations of reactionary activities, but no concrete proof was shown to back the accusations.

Today: Some 2,500 members of the police force have been removed from duty and reassigned to other posts since the launch of the corruption investigation. The officers are accused of abusing their authority, but no evidence has been provided. Moreover, some officials from other government agencies, including the Turkish Radio and Television Corporation (TRT) and the Ministry of Finance, were also sacked.

Feb. 28: The Higher Education Board (YÖK) introduced a lower coefficient system in an attempt to keep students from religious imam-hatip schools, classified as vocational schools, out of the secular higher education system. Due to this system, graduates from vocational high schools had points deducted from their admission scores when they applied to a university department unrelated to their curriculum. The system made it more difficult for an imam-hatip school graduate to gain entrance to medical school than a student from a normal high school with the same university entrance exam score. The system was an obvious violation of the principle of equal opportunity in education.

Today: The government is forcing exam preparatory schools, which help students prepare for standardized tests, to close. It has already prepared draft legislation that would close the prep schools. Critics of the plans, however, say prep schools help to lessen the educational disparity between private and public school students. In addition, the move is seen as a huge blow to free enterprise.