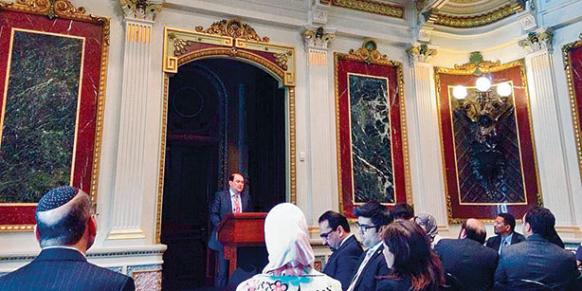 Emre Çelik speaks at the White House during an interfaith gathering for the Eid al-Adha holiday.

The White House traditionally hosts an iftar (fast-breaking) dinner every year for representatives of Muslim communities in the United States, but Tuesday’s event was the first time that they have hosted a celebratory event for Eid al-Adha, upon the suggestion of Rumi Forum. The opening speech of the event was made by White House Public Relations Office Deputy Director Ashley Allison and Rumi Forum President Emre Çelik.

The forum, of which Islamic scholar Fethullah Gülen is the honorary chairman, provided food for the event.

Speaking to Today’s Zaman, Çelik said Rumi Forum came up with the idea to host a celebratory event for Eid al-Adha with the attendance of representatives from different religions. The event was attended by about 60 people from various interfaith organizations in Washington, including representatives from Christian and Jewish organizations in the US, as well as Muslims.

At the event, different faith groups’ representatives delivered speeches emphasizing the importance of interfaith dialogue. The evening ended with a closing speech by Special Assistant to the US President and Executive Director of the White House Office of Faith-based and Neighborhood Partnerships Melissa Roger.

According to its website, Rumi Forum was founded in 1999 “with the mission to foster intercultural dialogue, stimulate thinking and exchange of opinions on supporting and fostering democracy and peace and to provide a common platform for education and information exchange.”

The principal goal of the Rumi Forum is explained on its website as promoting peace in the world and contributing to the peaceful coexistence of adherents of different faiths, cultures, ethnicities and races.