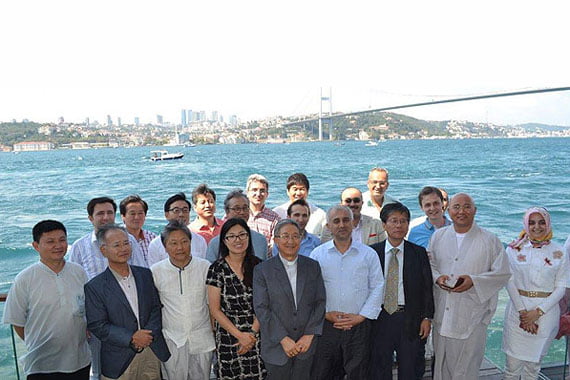 A group of South Korean religious leaders visited the Intercultural Dialogue Platform (KADİP) in İstanbul on Saturday to discuss interfaith matters and share ideas about Fethullah Gülen, a well-respected Turkish intellectual and scholar who was recently awarded the Manhae Peace Prize for his contribution to world peace.

Sung Won, deputy director of the Social Affairs Department of the Jogye Order of Korean Buddhism, was joined by several Buddhist monks and Christian priests, all from the Korean Conference on Religion and Peace (KCRP), on his first visit to Turkey.

Speaking to Today’s Zaman, Sung said his group is heading a project involved in bringing together various religious leaders to promote dialogue. South Korea is home to 60 religions and 600 sects, all living in harmony and respect for one another, according to Sung. This has prompted his group to look for other countries that also have a multi-faith structure and to see how faiths there interact with one another.

This is why Gülen’s work on interfaith dialogue, along with the recent coverage of his work following his being awarded the Manhae Peace Prize, was of such interest to the group. The KCRP has representatives from seven religions but does not include anyone representing Islam. It would like to increase this number and sees in Gülen a possible partner.

KADİP is a platform of the Journalists and Writers Foundation (GYV), of which Gülen serves as the honorary president. Its İstanbul Dialogue Center in South Korea has worked together with the KCRP to promote interfaith dialogue.

Archbishop Kim Hee Joong, who heads the KCRP, stressed that differences are a richness and not something to be afraid of, pointing to South Korea as a good example of how many different faiths can live side-by-side in harmony. He also praised Gülen and the work he does, saying, “The center of universal human values Gülen talks about we understand in our country as a human philosophy.”

The KCRP has also expressed a strong interest in translating Gülen’s works into Korean. Sung himself said he would personally follow up on the efforts.

Former South African President Nelson Mandela, exiled Tibetan spiritual leader the Dalai Lama and Iranian rights advocate Shirin Ebadi are among the prominent recipients of the Manhae Prize since they were first presented in 1997.