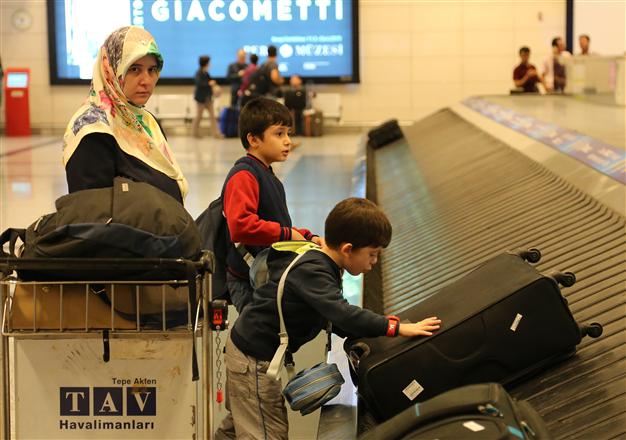 Turkey evacuated 55 Turks from Aden on April 3 after a delay due to the ongoing Saudi-led military operation in Yemen. AA Photo

More than 120 of the evacuated are personnel of Turkish schools affiliated with the Gülen movement, sources close to the issue told the Hürriyet Daily News.

Turkish schools in Aden and Sanaa were closed due to security concerns. Just 10 Turks chose to stay to travel to Taiz in Yemen, where a Turkish school is continuing its services.

Turkey has evacuated not only its own nationals but also a group of foreigners whose country sought help from Ankara, he added.

Turkey evacuated 55 Turks from Aden on April 3 after a delay due to the ongoing Saudi-led military operation in Yemen.

The evacuation was delayed because Ankara made efforts to obtain permission from three authorities for the flight of the plane, including the command of the Saudi-led operation Determined Storm and civil aviation authority in Yemen, according to sources. Turkey also informed all political groups in Sanaa about its evacuation operation.

Yemen has been in turmoil since September, when Houthi militia overran Sanaa, from where they allegedly planned to extend their influence to other parts of the country.

Several Arab states have joined the Saudi-led offensive in Yemen, which began on March 25 with a string of airstrikes on Houthi militia positions.

According to the Turkish Foreign Ministry, the Turkish naval vessel TCG Büyükada Frigate evacuated 55 Turkish citizens from the Yemeni port city of Aden and later dropped them off in Djibouti on April 3.

Turkish embassy officials then escorted the citizens to the airport in Djibouti, where they boarded a Turkish Airlines flight to Istanbul on April 4.

Many private and charter schools are operated by supporters of the Gülen movement across over 140 countries, including many in Africa.

President Recep Tayyip Erdoğan earlier said Turkey would seek the closure of schools in Africa linked to his ally-turned-foe Fethullah Gülen, opening a new front in his battle with the U.S.-based Muslim cleric.

Erdoğan accuses Gülen and his supporters in the judiciary and police of seeking to establish a “parallel state” and of orchestrating a corruption investigation targeting Erdoğan’s inner circle in December 2013 as part of a coup attempt.

Amid growing examples of discrimination against the Hizmet movement, the İstanbul Transportation Authority (İETT) canceled one bus line to Fatih University, which is considered to be affiliated with the Hizmet movement. An official from İETT, İsmihan Şimşek talked to Today’s Zaman and admitted that the 76F bus line had been canceled, but dismissed the idea that the decision deliberately targeted Fatih University. According to her, following analysis of demand for bus services in the region, the 76F bus line was discontinued while two other lines, HT18 and 418, continue to run with stops at Fatih University.