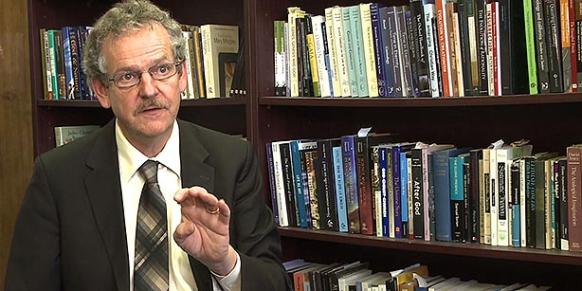 American Professor Philip Clayton, a philosopher and a theologian at the Claremont School of Theology in Claremont, California, spoke to Today's Zaman. (Photo: Cihan)

Speaking to Today’s Zaman, Clayton, a philosopher and a theologian at the Claremont School of Theology in Claremont, California, commented on the detention on Dec. 14 of prominent journalists, including Zaman daily Editor-in-Chief Ekrem Dumanlı and Samanyolu TV station General Manager Hidayet Karaca. “I view the arrests that have taken place recently as one of the most significant international crises for Turkey in a number of years,” said Clayton.

He further maintained that the pace Turkey had achieved in terms of taking steps towards EU membership seems to have reversed. “Mr. Erdoğan lashes out at the European Union and says, ‘We don’t care whether we become members of the European Union or not.’ And with that statement you suddenly recognize that there is no coherent presidency any longer. You have a 180-degree reversal of the sort of leadership that we detected in the early years,” Clayton stated.

In response to criticism by the 28-member bloc over last week’s crackdown on critical media outlets, Erdoğan lashed out at Brussels, telling it to “keep your [the EU’s] wisdom to yourself.” The president also reiterated that Ankara is not obligated to the EU and that his country is self-sufficient in many areas.

Dumanlı and Karaca were accused of conspiring against an al-Qaeda-linked group called Tahşiye, whose leader was detained for 17 months and later released pending trial. Its leader, Mehmet Doğan, recently told CNN Türk that he “loves Osama bin Laden.”

Karaca and three police officers were arrested on charges of forming and being members of an armed terrorist group, based on a once-popular soap opera called “Tek Türkiye” (One Turkey) that was broadcast by Samanyolu TV several years ago.

Erdoğan publicly defended Doğan, saying he was unfairly targeted and that he had been jailed for 17 years. It was not immediately clear why there was a discrepancy between official records and the period of detention that Erdoğan mentioned. The president also claimed that the Tahşiye leader was “90 percent blind” even though Doğan was seen reading from a paper live on CNN Türk last week.

‘In a democracy, dissenting voices are tolerated’

Clayton noted that in democracies such as United States, intolerance against opposition, especially on the part of the government, is inconceivable.

“So just imagine, the president of the United States would be criticized in The Washington Post, The New York Times [or] the Chicago Tribune, for some action … and then imagine that over the weekend, he would suddenly send out groups of policemen to march into The New York Times or The Washington Post, to drag the editor-in-chief out of his workplace and to throw him behind bars. I mean, this is incomprehensible in the American system,” Clayton said.

He also expressed disbelief over the statements of Prime Minister Ahmet Davutoğlu, who stated that the Dec. 14 operation was not about silencing free press but about the prosecution of illegal actions. “No such evidence has been offered to the international community, and every indication is that this is a vendetta. … And now, it’s as if the truth can’t be stated any longer,” said Clayton.

He criticized the Dec. 14 operation as an attempt to rouse fear on the part of media outlets that are critical of the government, stating: “To take the leading Turkish newspaper [Zaman], the leading television show and leading journalists who have been part of speaking that truth over the last couple of years, and suddenly imprison them in a sort of [lightning] series of raids […] sends the message that there will be no other voice [than] the opinion of the president. But clearly, that is a complete negation of democracy.”

Turkey’s deteriorating standing in the world

Turkey, which was once globally praised for how well it engaged with both the West and the East, has become a matter of concern for the global community as there are signs that Turkey is rolling back all the advances it had made in terms of democracy and the rule of law, according to Clayton.

“Should Turkey now fall into the sort of non-democratic rule, the silencing of opposition, the willingness to use force where dialogue once took place, that beacon of light across the Middle East is suddenly put out and the hope that Turkey sent for the future of the entire Middle East is now cast into question,” said Clayton.

He noted that contrary to the current image of Turkey in the Muslim world, Turkey was formerly seen as a model country by Muslim countries. “Turkey has been the Muslim nation that has been a light across the entire Middle East. Turkey has engaged [with] the West and the East, has been deeply focused on its Muslim identity and [has been] a model of a modern democratic state,” said Clayton.

The scholar expressed his disappointment over Turkey’s deteriorating international position as the country had enjoyed friendly relations with the West and had been eyeing a leadership role in the Muslim world. “One of the reasons we have been so excited about developments in Turkey over the last decade or so is that we have seen a model for a Muslim-majority nation, which, out of the spirit of Islam, out of the spirit of the Prophet [Muhammad], may peace be upon him, brings democracy, openness, dialogue and engagement with the worlds of science and with the international community. … Suddenly, it seems that entire process has been reversed,” said Clayton.

Clayton called Erdoğan’s ongoing smear campaign against the faith-based Hizmet movement ironic since the movement is renowned for taking initiatives around the world in the areas of humanitarian aid, education and cultural activities.

After a major corruption scandal involving people in Erdoğan’s inner circle erupted with a wave of detentions on Dec. 17, 2013, the president has framed the corruption investigation as a “plot against his government” by the Hizmet movement and foreign collaborators. Erdoğan has contended that the state bureaucracy has been infiltrated by people associated with the Hizmet movement, and he has accused them of being part of a “parallel structure.”