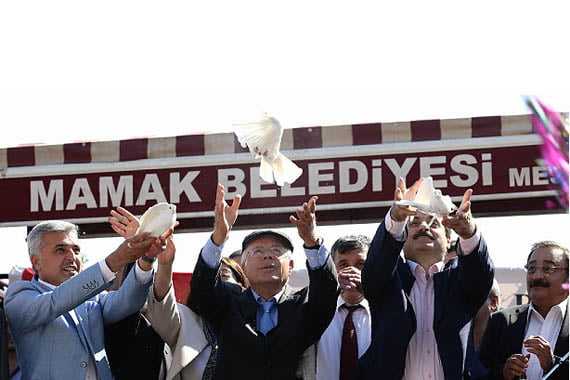 A group of Alevis performing the ritual “semah” dance at a gathering in a cemevi, the traditional place of worship for Turkey’s Alevis. (Photo: Today's Zaman, Mustafa Kirazlı)

There are plans to launch joint mosque-cemevi (Alevi house of worship) projects in five other Turkish provinces in addition to the recently launched project in the Turkish capital city of Ankara, the Radikal daily reported on Tuesday.
According to the daily, the locations of the new mosque-cemevi projects will be the Kartal district in İstanbul, the Çiğli district in İzmir, Çorum, Adana and Gaziantep.

The groundbreaking ceremony of the first ever joint mosque-cemevi culture center was held in Ankara on Sunday with the participation of a number of government figures as well as Alevi and Sunni community leaders and members of the public.

The project aims to strengthen the ties between the Alevi and Sunni communities in Turkey in the face of efforts to ignite sectarian tension in the Middle East.

The project in Ankara, which was suggested by Turkish-Islamic scholar Fethullah Gülen, is being financed by businessmen both from the Alevi and Sunni communities and is being conducted by the CEM Foundation and the Hacı Bektaş Veli Culture, Education, Health and Research Foundation.

The project has drawn criticisms from some marginal Alevi and Sunni circles and a group of nearly 500 people protested against the project, clashing with the police and throwing stones at them during the groundbreaking ceremony in Ankara on Sunday.

President of Hacı Bektaş Veli Culture Education Health and Research Foundation Kemal Kaya, in remarks to Radikal, has called on opponents of the project to establish dialogue with them.

“Whoever has a question regarding this project, they should come and ask us. We are ready for dialogue and to eliminate question marks,” he said.

There are 10 administrators at the Hacı Bektaş Veli Culture Education Health and Research Foundation, two of whom are Sunnis. Kaya, an Alevi, said he is having difficulty in understanding the criticisms coming from Alevi circles. He said the project in Ankara is a positive step toward the recognition of cemevis as places of worship by the state.

Regarding critics’ claims that the project aims to assimilate Alevis, Kaya said: “This is not a state-sponsored project. This is an effort by two private institutions to win hearts. This is not the first time that such a project has been implemented. This model exists in Hacı Bektaş [a town in Nevşehir]. We don’t say there should be a cemevi next to every mosque. They should exist where they are necessary.”

Seyit Derviş Tur, an Alevi opinion leader, also hailed the mosque-cemevi project, saying that it will strengthen brotherhood between Alevis and Sunnis.

“Those taking to the streets in protest of the project are former politicians. Most of them are at the head of our foundations and federations today. They do not want Alevis to be at peace with governments,” he said.

“There were some prejudices among Sunnis about Alevis. This project will help them get rid of these prejudices,” he said.

On the other hand, Şah Kulu Sultan Dervish Lodge Executive Board member Hüseyin Taştekin said it would have been better if the joint mosque-cemevi project had been announced either by the prime minister or the president. He said the project would have served societal peace more that way.

He said the demand of Alevis is recognition of cemevis by the state and the state not interfering in places of worship in line with the principle of secularism.