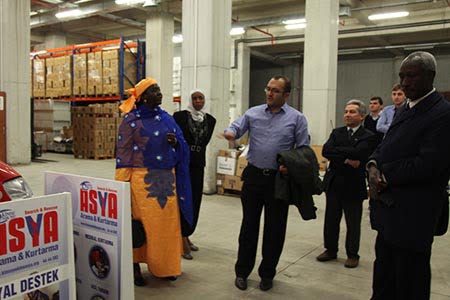 Interacting with the foundation officials at the visit, a token of the bridge of friendship between Turkey and Niger, the Nigerien minister thanked Kimse Yok Mu for its humanitarian relief activities in Niger. Grateful to the Turkish donors for the water wells, in particular, the minister said, “We need powerful civil society organizations, like you, in numerous areas. We would like to thank you for your assistance in education besides the water wells you sponsored. As the country’s minister of education, I would like to tell we need more assistance in education. Our orphans, in particular, need your aid.”

Following his remarks, the minister MME Ali Marianna Elh. İbrahim signed the guest book and was presented a handmade tile plate as a memento of the day, by the foundation officials.

6 April 2012 / TODAY’S ZAMAN, İSTANBUL The Turkish charity foundation Kimse Yok Mu (Is Anybody There) has begun to send aid to thousands of Syrian refugees who have escaped to Lebanon and Jordan from their conflict-stricken homeland. Tens of thousands of Syrian citizens have taken shelter in the neighboring countries of Turkey, Jordan and […]

Hizmet volunteers, who set out on a nonstop journey of service, carry forward their initiatives around the world. They recently established yet another school in Nigeria’s Kano state.