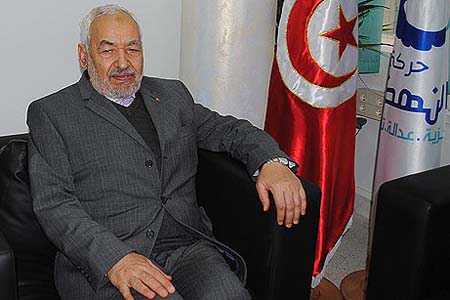 The head of Tunisia’s largest opposition movement, Rachid Ghannouchi, has warned that Islam is endangered by radicalism, which he described as a project of bringing about incitement and civil war.

The Ennahda leader was invited to the symposium titled “Ijma as a Common Roadmap and Collective Awareness” that is scheduled to take place in İstanbul over the weekend, but he declined the invitation due to upcoming surgery. Scholars from 80 countries are expected to convene at the two-day symposium during which they will exchange views about ijma, an Islamic term meaning religious consensus and stress the unity of Muslims. The Tunisian opposition leader spoke to Today’s Zaman on Thursday about Turkish politics and the Hizmet movement.

Extremism and radicalism cause Muslims to kill one another, according to Ghannouchi. “Islam in our age is under threat from radicalism. Radicalism is a project of creating a civil war in the Muslim community. No good can come out of radicalism,” he said.

Commenting on Turkey’s efforts to ramp up democratization, he said calling the democratic transformation in the country a “return of Islam,” as some have claimed, is wrong. “Turkey has always been a Muslim country. It is returning to being proud of its Muslim identity,” he noted.

Tunisian opposition leader Ghannouchi also touched on Islamic scholar Fethullah Gülen and the Hizmet Movement, inspired by Gülen’s views and works. Ghannouchi said that Tunisians value Gülen’s contemporary Islamic activities very much. “In the same vein, we attach great value to the education and media institutions founded upon his advice. I have read some of his works that promote noble Islam along with the Quran and the sunnah [anything the Prophet Muhammad said, did or approved of]. His [Gülen’s] remarkable views combine the nobility of Islam with the modernism of our era. We joyfully welcome his efforts which increase more and more without making a fuss and which show the bright side of Islamic civilization in our era.”

Ghannouchi applauded the “Ijma as a Common Roadmap and Collective Awareness” event, describing it as “a very important project to reveal Islam’s bright side in this age. … It takes place at a time when, on the one hand, we can observe the bright side of Islam and democratic revolutions, and on the other hand, we see clashes of views, radicalization and conflicts. The clashes of views reached such a level that Muslims are now killing their Muslim brothers and sisters. And yet, as a matter of fact, a Muslim killing another person is one of the greatest sins,” he noted.

The Tunisian politician noted that ijma is the opposite of individualism. “Allah is the only One. Human beings, on the other hand, differ among one another. That’s why we need to have a council to turn our differences and plurality to unity and alliance. Councils are the tools to transform the differences into a dialogue and alliance. Allah’s Oneness is unique, whereas it is impossible for us to achieve such a unity. What is possible for us is a relative unity. That is approaching ijma while maintaining small differences,” he said.