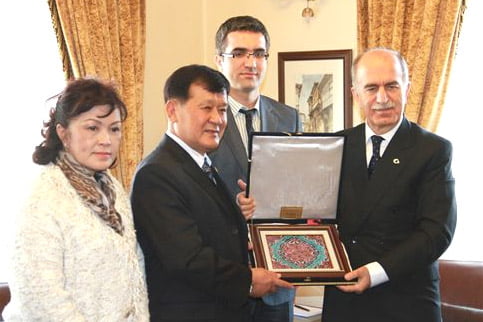 Highly satisfied with the Turkish Schools operating in their country and demanding more, an official delegation from Thailand visited Bursa, Turkey. Bursa Governor Sahabettin Harput expressed his pleasure to host Chiang Mai Governor Tanin Subhasaen, his wife and accompanying officials from such a far but friendly country.

Emphasizing the significance of Thailand as a country housing 66 million on 500.000 km2 area, “Thais are a very hardworking nation in the region. Thailand, which holds a critical position among the world’s countries with its high scale of production and friendly people, is certainly significant to us as well,” said Harput.

Harput also noted that he mentioned the visit to the Minister of Foreign Affair Ahmet Davutoglu in advance and added: “Davutoglu told me that he had visited Chiang Mai and Turkish Schools there earlier. He was very pleased to be so well-received there. He, therefore, will gladly support any possible cooperation between Bursa and Chiang Mai. I believe this visit will open new doors to not only close friendship ties but a wide range of relationships as well.”

“Turkey-Bridge between Asia and Europe”

Chiang Mai Governor Tanin Subhasaen underlined the importance of the existing relationships between Turkey and Thailand. Subhasaen continued: “We have one of those Turkish schools founded by Turkish entrepreneurs in Thailand. It offers remarkably high-quality education. We can take the current partnerships even further. One of our reasons to come here is to form sister city relations between Bursa and Chiang Mai.”

The Governor added that they know about Turkey through Ottoman Empire history and Turkey occupies a strategic region extending a bridge between Asia and Europe. “We know that Turkey is bridging Asia and Europe. We are friends and we consider you Asians like ourselves. We could have the chance to witness the hospitality of Turkish people firsthand during our two-day stay here.” Subhasaen said.

Following the remarks, a protocol of friendship and co-operation between the two cities was signed by the governors. Bursa Governor Harput stated that the protocol features multiple cooperative relationships in economy, trade, tourism and culture. His counterpart Subhasaen agreed that the ultimate purpose of this protocol is to promote cultural, commercial and, in particular, educational exchanges. The meeting concluded with the Governor Harput presenting a plaque to Subhasaen.

AS a Nigerian who has experienced Turks and their culture both at home and in Turkey for over a decade of my life, I have come to see and feel Turkey as my second country. My first interaction with the Turkish society was through education in Abuja at one of their many schools nationwide before I went on to spend five years in Istanbul.