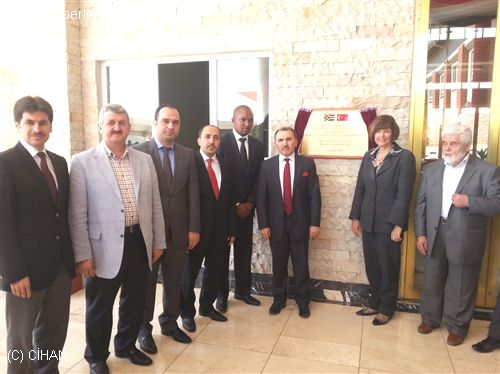 Managers of Gaziantep based Caliskan Group and South Africa based Sumo Coal, brothers Israfil and Semsettin Caliskan, have constructed a 500-student capacity school in Pretoria, the managerial capital of South Africa. The inauguration of Star College was performed by the minister of education of Gauteng province, Barbara Creecy, in an opening ceremony hosted by a former [Turkish soccer team] Fenerbahce midfielder Johan Moshoe.

The ceremony started by Moshoe with Turkish jokes. Moshoe, who is currently the coach of Star College soccer team, talked about his love of Turkey, where he spent his 11 years. Students sang Turkish songs and dance show of little ones received great applause from the audience.

After offering his gratitude to Turkish investors for donating a large education complex to the capital, Mosheo invited Fatih Caliskan who was representing his father Israfil Caliskan, and Semsettin Caliskan to the stage. Greecy presented Caliskan brothers with a plaque of appreciation, and said: First of all, I would like to thank you very much for gifting us with this magnificent building. I would like to thank Ufuk [Horizon] Education Foundation who has opened 8 education centers in South Africa. The school that we are inaugurating now will be a flagship of others. But I hope that it will not be the last one and you will open more schools. Turkish schools do not only provide students with just an academic education they also prepare students for the society by not neglecting important aspects of education such as sports, personal development, family and adaptation to social life, and universal code of ethics. Turkish schools successfully educate out kids on topics of great importance to us such as math, science, and technology. In this respect, they serve as a model for education in South Africa. We have sent a delegation to Turkey to study your method of education.

Following the opening ceremony, the guests were served with delicacies from Turkish cuisine.