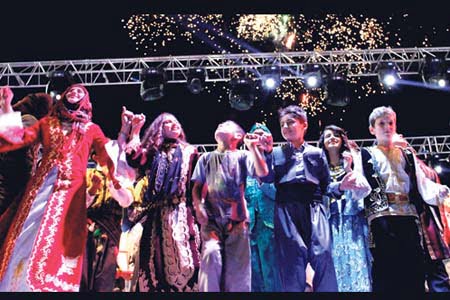 The festival in Diyarbakır was organized under the slogan

Students visiting Turkey from 140 countries for the 11th International Turkish Olympiad, a festival that celebrates the Turkish language and has brought together 2,000 students to Turkey this year, fascinated locals in the predominantly Kurdish city of Diyarbakır by singing songs in both the Kurdish and Turkish languages on Wednesday night.

The 11th Olympiad is organized by the International Turkish Education Association (TÜRKÇEDER) as part of the International Language and Culture Festival and began on June 1 with a grand ceremony in Ankara. It will end on June 16 with a closing ceremony to be held at Atatürk Olimpiyat Stadium in İstanbul. The Turkish Olympiad saw students competing in 55 cities across Turkey.

The message of brotherhood and peaceful coexistence was given throughout the stage show held in Diyarbakır on Wednesday evening. Nearly 25,000 locals attended the show in which 80 students from 20 countries completed in solo and group categories. The event started with the performance of Arsalan Naseer of Pakistan, whose voice has been compared to that of Kurdish singer and composer Ahmet Kaya. Diyarbakır locals took great interest in Naseer’s performance. Then, a local singer named İbrahim Candan was invited to the stage. Candan welcomed the spectators in the Kurdish language and sang a Kurdish song. The show continued with a performance of an Iraqi student who sang a Kurdish song “Rındamın,” (my beauty). An African student sang a Kurdish song, which attracted great attention from the spectators.

Diyarbakır Governor Mustafa Cahit Kıraç opened the competition with a few words: “Our faith, traditions and life are based on love, peace and brotherhood. When we first see someone, we salute them. This salute represents togetherness and brotherhood. … There are students coming to Turkey from all around the world. These students learn the traditions and cultures of the cities they visit. When they return home, they share those traditions and cultures with their families, friends and relatives. I want to thank all the people in organizing committee for providing such a great show to us today.”

Stating that there have been great efforts made to ensure the success of the Turkish Olympiads, Kıraç stated that he visits students and teaches at Turkish schools in most parts of the world during his overseas visits, adding: “It was not easy for Turkish schools to reach this point. The number of Turkish schools was only between 10 and 15 at the beginning, but this number is increasing year by year. Now, these schools are serving in 140 countries in the world.”

Agriculture and Rural Affairs Minister Mehdi Eker, who is from Diyarbakır, made a speech during the show. Stating that Diyarbakır has been the cradle of 28 civilizations over the centuries, Eker added: “A few years ago, this cultural festival [Turkish Olympiads] was only being held in a few cities, in particular Ankara and İstanbul. We asked why we don’t also hold stage shows in Diyarbakır. However, Diyarbakır was suffering a problematic period [referring to the period when the fight against the Kurdistan Workers’ Party (PKK) intensified in the city as the city was the center of the conflict] at that time. This city was being defined as the center of the fight instead of being identified with its rich history. Now, Diyarbakır is hosting this cultural festival for the second time with the participation of thousands of people. I want to thank all the people who have contributed to the organization of this event.”

Speaking of the settlement process launched by the Turkish government in October 2012 to end Turkey’s decades-old terrorism problem, Eker stated that people of Diyarbakır are now singing the songs of peace, not songs of fighting.