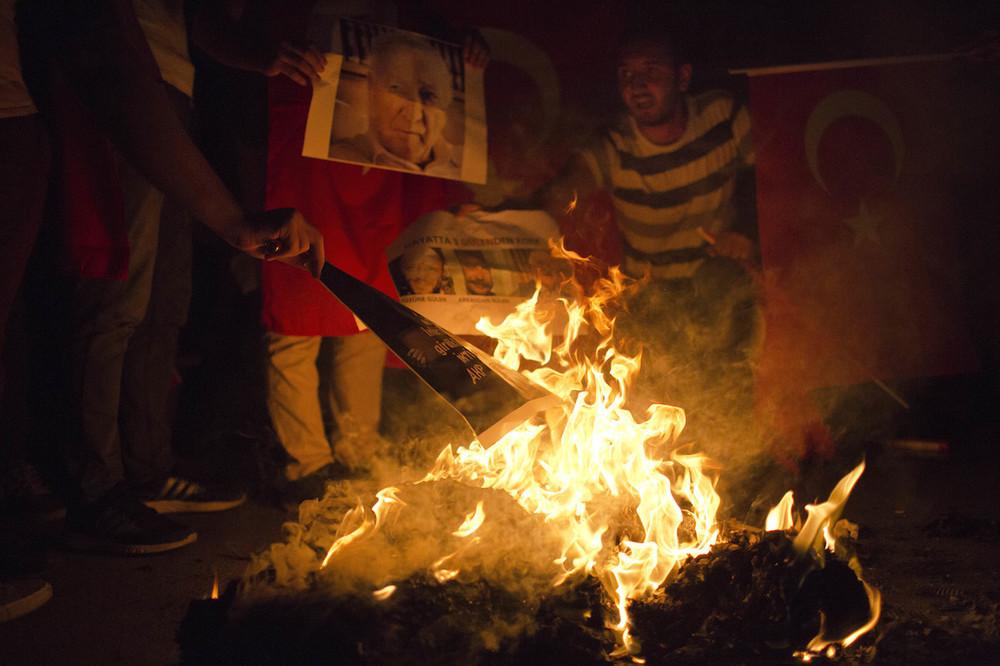 To plan a speedy political exile from Turkey today, you need two things: a world map and the Wikipedia page on “visa entry requirements for Turkish citizens.” If you get out a highlighter and start cross-referencing the two, you’ll quickly see the bottom half of the map is more accessible than the top. If you can speak Spanish, the options are endless: almost every country in Latin America is happy to have you.

“It can’t be that hard to learn, can it?” asked my friend, looking up Duolingo on the app store. We were sitting on a balcony in Istanbul, where we both live. From Taksim Square, just a few hundred meters away, came the sound of thousands of people singing the name of the president, Recep Tayyip Erdoğan.

Since an attempted military coup took place last month, Turkey has been more divided than ever. Government supporters and others who took part in the huge public effort that helped stop the coup have flocked to squares across the country every day to revel in the survival of Turkey’s democratically elected government.

But others, including government critics like my friend, are not celebrating. They’re terrified they’ll be caught up in the huge purges that the government has ordered since the coup was thwarted, which have so far seen more than 60,000 people suspended from their jobs and 18,000-plus arrested—including 17 prominent journalists.

Dozens of institutions linked to Fethullah Gulen, a cleric who is suspected of organizing the coup, have been closed down, and 50,000 passports have been canceled—a move the ruling AKP says is aimed at stopping plotters from fleeing the country. A three-month state of emergency has been declared and the government has begun to rule by decree.

Just a week after the coup, Amnesty International published a report containing evidence it says proves the torture and rape of suspected coup plotters in detention—claims the state has denied.

The most disturbing thing is that you can’t figure out what will happen, you can’t even make plans.

Though the government claims that they are only targeting supporters of Gulen, who lives in self-imposed exile in a Pennsylvania mansion, critics say the purges are a smokescreen for an attack on any critics of the government. Many liberals, terrified they’ll be detained or banned from doing their jobs, are making plans to flee the country.

“This is the first time I’ve started thinking maybe I should leave,” said Burcu, an academic living in Istanbul. “I suffer from the termination of freedom to work, speak, and even go abroad now. It’s completely unstable. That is the most disturbing thing: that you can’t figure out what will happen, that you can’t even make plans.”

After google imaging every country in South and Central America, my friend eventually settled on Costa Rica. There are beaches and Americans there, he reasoned, and where you have beaches and Americans, there will be work in bars. But others—especially academics—want to move somewhere they can find work in their field. For most, that means Western Europe or the US—neither of which are particularly keen on handing out visas to Turks.

“I wouldn’t leave Turkey for just any country whatsoever. Hungary, Russia, and Belarus are no better. I would like to go to Western Europe, possibly back to Britain,” said Ali, a policy analyst at a think tank who did his master’s degree in the UK. “I feel more at home there. July the 15 [the night of the coup] was a good reminder of why I’d really like to get out again. I used to criticize the government openly… but with the state of emergency and the suspension of the European Convention on Human Rights, I think the atmosphere is too intimidating.”

It’s a strange position to be in. On one hand, middle-class liberals in Istanbul aren’t living in a war zone. Their life isn’t in direct danger. But the fear of arrest and the pervasive, haunting feeling of being watched—having to constantly self-censor everything you say and write—is grinding. For most, though, it’s not strong enough grounds to get political asylum in the West. They have to find another way out.

“I just feel disillusioned. I don’t want to be this involved in politics,” said Mert, an academic, sitting in a cafe on Istanbul’s European side. “You can only fight so much. After a point, you start thinking that living your life the way you want is a political statement in itself. It’s ridiculous.”

For many, the desire to leave is driven by a feeling that things are about to get a lot worse. On the night of the coup, almost 300 soldiers, civilians, and policemen died. F-16 jets bombed government buildings in Ankara, and attack helicopters strafed the streets with bullets, mowing down anyone in their way. On the Bosphorus Bridge, where coup plotters had parked tanks to stop cars crossing to Europe from Asia, pro-government protesters allegedly beheaded a soldier.

Many of the army recruits who were on the streets on the night of the coup have since claimed they had no idea they were part of a plot to overthrow the government and had been told they were taking part in a military exercise.

No one knows whether the president will use this period to reconcile with his critics, or use the state of emergency to make a grab for power. Such a move could trigger a second coup attempt or even lead to civil war.

Ayhan couldn’t wait to find out which way it would go. A few days after the failed coup, his name appeared on a list of journalists suspected of supporting the plotters—a claim he denies. He knew he had to get out.

Avoiding the airports for fear of detention, he managed to escape the country. “It’s not safe,” he said, from a secret location. “Whatever you write, they make a case against you. It’s not possible for me to work any longer. It’s very difficult for those who believe in democracy and for liberals who side with the standards of the EU.”

Back on the balcony in Istanbul, my friend was looking on Skyscanner for flights to Costa Rica. They were expensive—more than three times the average monthly Turkish wage. The Americans on the beaches would have to wait.

Some names have been changed to protect identities