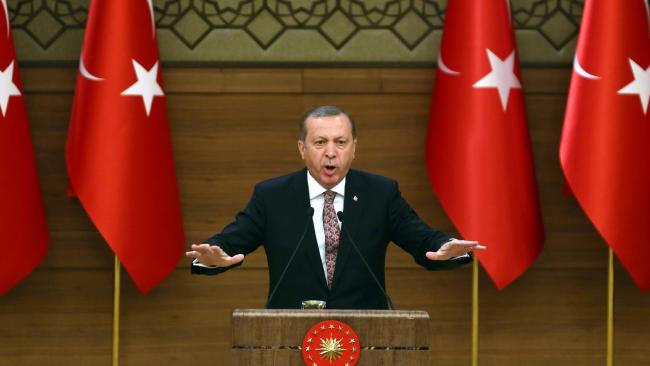 The Turkish government has now rebranded the movement as the Fethullah Gulen Terrorist Organisation, and Cavusoglu said that the ‘secretive transnational criminal network’, is operating in India through schools and associations.

Interestingly, Gulen was once an important ally of President Recep Tayyip Erdogan, and going by his ideology, comes across as a more moderate figure than Erdogan, who has been pushing an Islamic ideology which has little space for secularism.

Till very recently, Erdogan’s policy being criticised for allegedly allowing Turkish territory to be used by terrorists, who would easily be allowed to travel to neighbouring Syria, much like how Pakistan was used as a transit point by jihadis after the Soviet invasion of Afghanistan.

WHO IS GULEN AND WHO ARE HIS FOLLOWERS?

Gulen, a follower of the Hanafi School of Sunni Islamic legal reasoning, cannot be termed as a secular leader. But he is seen as an advocate of modernity and interfaith dialogue, akin to Sufism.

There are institutions that are affiliated to or inspired by Gulen’s Hizmet movement, and are involved in imparting education in India.

Take the Learnium chain of schools, for example, which has branches in Delhi and other Indian cities. While the school administration could not be reached for comment, the activities undertaken by the school do not appear to come in the category of terror activities, as is being claimed by the Turkish government.

Another branch in Hyderabad, called the Iqbalia International School, too, according to its website, caters to students from all sections, and has an inclusive management committee. The modern school follows the CBSE curriculum, and claims to train the students in the Turkish language, besides offering Spanish and Russian as secondary languages.

Similar schools are run in other countries, including in Sri Lanka and Pakistan in the neighbourhood.

Even the Indialogue Foundation, another such organisation, which claims to be inspired by the Gulen movement, has been in India since 2005, and has expanded to five cities, including Mumbai, New Delhi, Hyderabad, Bengaluru and Kolkata. Its activities, according to its website, seem to be confined to initiating dialogue between different cultures and religions.

The foundation has helped organise the International Festival of Culture and Languages, alongside the Union Ministry of Culture, the UN Information Centre for India and Bhutan, the Arya Samaj, the Chinmaya Mission, the Delhi Gurdwara Management Committee, the Art of Living Foundation, the India Islamic Cultural Centre, Baba Ramdev’s Patanjali and others.

Among other things, the foundation also holds events to connect businessmen from Turkey and India.

Turkey is going through a turbulent phase after the failed coup attempt in July. Critics point out that President Erdogan has taken the opportunity to target his political opponents.

Several dissidents, including journalists, have been arrested in the aftermath of the failed coup, besides the government banning media outlets which it felt were associated with Gulen, the ‘spiritual leader’ in exile, who the government claims masterminded the attempted coup.

Erdogan and other officials have claimed that a section of the Turkish armed forces loyal to Gulen was involved in the failed coup.

Indian government agencies are said to be investigating the concerns conveyed by Turkey about the working of Gulen-inspired organisations, according to officials of the Ministry of External Affairs (MEA).

Turkey has recalibrated its foreign policy after the happenings in July, with the Erdogan dispensation now seemingly keen to reach out to Russia and others for a solution of the crisis in Syria. Earlier, it was seen to be aiding the flow of foreign fighters to Syria, where they would fight for terrorist organisations like the ISIS and Al Qaeda. Turkey is seemingly unhappy with the US, and wants it to extradite Gulen.

Things between Erdogan and Gulen, who lives in exile in the US, turned sour especially after allegations of corruption came up against the Turkish President and his family.

TURKISH STANCE ON PAKISTAN AND KASHMIR

Meanwhile, the Turkish foreign minister, during his visit to Delhi, also said that his government is reaching out to all countries where the Gulen ‘terrorist organisation’ has a presence, asking them to take action against it.

Indeed, before coming to New Delhi, Cavusoglu was in Islamabad, pressing the Pakistani government to initiate action against organisations affiliated to the Gulen movement.

However, that was not the only thing the Turkish foreign minister spoke about. He had rather strong comments to make on the ongoing unrest in Kashmir, which the Indian government insists got aggravated due to Pakistan’s continued support to terrorist elements.

Instead of shunning Pakistan’s use of terror as a tool of foreign policy, Cavusoglu said Turkey “fully supports Pakistan’s position on Jammu and Kashmir”, and that as an active member of the Organisation on Islamic Cooperation’s contact group on Kashmir, Turkey would ask the Secretary General to mobilise the contact group and send an observer mission.

OIC secretary-general Iyad Ameen Madani visited Islamabad on 20 August, and was briefed on the “alarming situation” in Kashmir, including the “human rights violations” and that both sides reviewed additional actions that 57-member OIC could adopt.

An unhappy Indian government is said to have raised the issue with Turkey, according to reports, in which it was told that the Turkish government believes that Kashmir is a bilateral dispute between India and Pakistan.

Even in June this year, Turkey had sided with Pakistan at the important Nuclear Suppliers’ Group meeting, where India’s membership came up for discussion. While it did not oppose India’s bid, it pushed for Pakistan’s entry, even when the latter’s membership was not even a part of discussion, according to reports.

However, during his trip to India, the foreign minister is said to have assured that Turkey will back India’s bid for permanent membership, a boost for the Modi government, which is also trying hard to convince the Chinese to not create ‘procedural hurdles’.

Meanwhile, with no end in sight to the chaos in the Middle East, India has been pragmatic in its outreach. MJ Akbar, the Minister of State for External Affairs, is visiting Iraq and Syria, the two worst affected countries in the region.