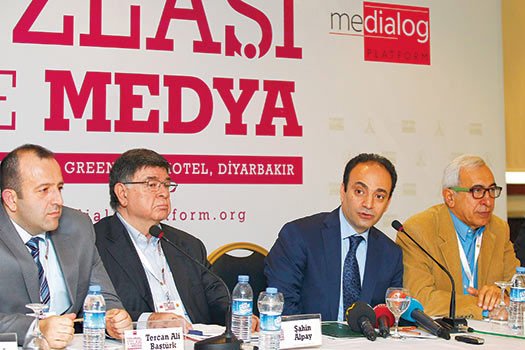 Writers and academics gathered in a Diyarbakır hotel on Saturday for a workhop to discuss media’s role in social cohesion. (Photo: Zaman daily)

Prominent writers, academics and representatives from various media organizations gathered on Saturday in the Kurdish-populated province of Diyarbakır to discuss the role of the media in promoting social cohesion.

The workshop, titled “Social Cohesion and the Media,” was organized by the Medialog Platform, an industry advocacy group connected to the İstanbul-based Journalists and Writers Foundation (GYV).

The opening speech of the event was delivered by Diyarbakır Mayor Osman Baydemir, who saluted the participants in Kurdish.

“I regret to say that there is a social conflict between the east and the west and the south and the north of Turkey,” Baydemir said, adding that social cohesion is a prerequisite for achieving peace. The Diyarbakır mayor further stated that he believes the language used by the media is crucial in removing social conflicts.

“The media should speak the language of peace as it plays an effective role in shaping society. It is responsible not only for what it has done but also for what it has not done. For example, I think we closed our eyes to what happened in Roboski,” said Baydemir, criticizing the media for not focusing much on the Uludere tragedy, in which 34 civilians were mistaken for terrorists and killed by military airstrikes in Şırnak’s Uludere district, named Roboski in Kurdish, due to false intelligence in December of 2011.

Also speaking at the event, GYV President Mustafa Yeşil recalled another Medialog meeting in 2010 in the southeastern province of Mardin, which dealt with the perception of the East and Southeast in the national print and broadcast media.

“We talked about how the way the media covers news from the region may hurt its people [at the 2010 meeting]. I regret to say that we still tackle the same issues today,” Yeşil stated.

Today’s Zaman columnist Şahin Alpay, who was the moderator of the workshop, remarked that the media should provide people with accurate and reliable information without any distortion. Alpay also touched upon the indispensability of editorial independence and the significance of a code of ethics for media organizations, stating that the Turkish media is led more by bosses than news editors.

Journalist Cemal Uşşak who is the vice president of the GYV also highlighted the need for editorial independence, calling his colleagues to act with common sense and listen to their conscience as well.

“The [Turkish] media has just recently recognized the presence of Kurds, Laz, Georgians, Alevis and Yezidis in Turkey. How can a media outlet provide reliable information without recognizing these [ethnicities],” Kurdish intellectual İbrahim Güçlü said in his address to the participants.

“How can you bring peace without giving the Kurds equal rights,” Güçlü asked.

In his speech at the workshop, İhsan Dağı, another Today’s Zaman columnist, said the role of the media in maintaining peace in society is sometimes exaggerated.

“Some media organizations believe they can contribute to national peace even without touching upon many issues on the country’s agenda. I doubt that this is a correct stance,” a skeptical Dağı said.

Here you can find the full speech of Mr. Hüseyin Hurmalı (Secretary General of (Journalists and Writers Foundation) Abant Platform) * * * United Nations High Level Meeting in the Culture of Peace “The role of interfaith cooperation in promoting a global Culture of Peace“ Excellencies, Ladies and Gentlemen; It is my privilege to speak […]

A book written by Kurdish journalist Rebwar Karim on Islamic scholar Fethullah Gülen’s approach to the Kurdish question has been attracting a significant amount of attention in northern Iraq.