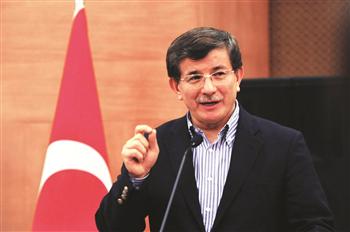 “We should build dialogue, instead of physical barriers,” Davutoğlu said on Dec. 29 in a televised interview, “There is a way out of this crisis, let’s have dialogue… That is why Erdoğan invited Gülen to Turkey.”

“It is obvious how much the civil society, which was oppressed during the Feb. 28 [events], including the Hizmet Movement, has developed during our term,” the minister added.

An image as if there was double authority would harm the state, but would harm all congregational and civil society structures more, Davutoğlu argued.

Davutoğlu assured that his government was determined to be a strict follower of allegations of corruption and bribery.

“The issue has turned into something other than corruption and has taken a dimension of revenge as I see on the face of the prosecutor that was delivering the statement,” the minister noted referring to the prosecutors of a recent graft probe, who are said to be close to the Gülen Movement.

“Reading a statement does not suit a prosecutor,” he said, adding that the judicial system should be purified from all sorts of feelings of revenge.

The minister recalled earlier claims against his government that Turkey was opening new embassies all around the world in order to serve Gülen Movement.

“Are we the obstacles that are in front of the services?” he asked.

The recent political crisis between the government and Gülen movement has reached a point which would “please those who are uncomfortable with Turkey,” the minister said.

Elaborating on the “foreign powers” to which Prime Minister Recep Tayyip Erdoğan often referred in relation to the graft probe, Minister Davutoğlu addressed those “who were uncomfortable in 2003 because it was standing on its own legs, were again leery of Turkey today.”

In the international arena, some circles conducted “psychological operations” during the last two years, which were more intense over the past year, against him with “demonizing” tactics launched to smear the government.

Those circles tried to paint him as a warmonger, because the government was against an “oppressor” in Syria, Davutoğlu said.

A smear campaign was launched against Hakan Fidan, chief of the National Intelligence Organization (MİT), as the body’s “influence was in rise.”

Some circles in the international arena preferred Turkey’s “static” foreign policy of the 90’s, which was “merely involved in nearby crises” such as Cyprus, he said, noting that now the country had advanced its influence in the world.

Davutoğlu mentioned Turkey’s efforts and influence in Somalia in this regard.

Deputy PM Arinc, “I follow Gulen’s every word and every move. May God be pleased with him. He is giving guidance and heads up to us as well. He is lighting the way for us, like a lighthouse.”