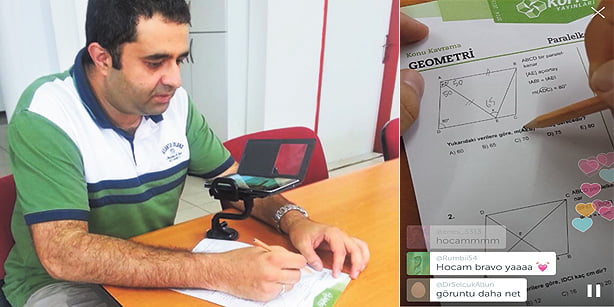 A teacher known as “Ekol Hoca” has gained attention after the CEO of Periscope thanked him for providing online lessons. (Photo: Todayszaman.com)

Kayvon Beykpour, who co-founded Periscope, an app owned by Twitter, said on a live Periscope broadcast that it was “awesome” to see the Turkish teacher, Mustafa Mete Ekol, giving online educational classes to students.

Ekol, who has some 86,000 followers on Twitter, uses Periscope to broadcast live classes to hundreds of students, calling it an “online dershane.”
The teacher is a leading critic of the government for its move to shut down dershanes — a third of which are linked to the faith-based Gülen movement — and is using Periscope to demonstrate that the authorities cannot prevent him from teaching. When he broadcasts his lessons, hundreds of students on their phones or tablets listen to what is sometimes an hour-long class from the teacher, who teaches geometry and math.

Speaking to Today’s Zaman, Ekol said: “We have been in a lot of trouble for two years because of the government. If the Constitutional Court hadn’t annulled the law [seeking to shut down dershanes], we would be unemployed after Sept. 1. The government had promised to behave fairly and employ us as schoolteachers, but it didn’t. I have been teaching for 20 years and have seen my students coming in first in the [nationwide] exams. However, I would have ended up being unemployed if things haven’t turned out this way.”

Stating that he has been giving online lessons since 2006, Ekol added: “After I couldn’t give my website for online lessons much attention because of the latest disturbances [over the law to shut down dershanes], I thought about how I could use social media to educate people. At first, I posted geometry notes on my Twitter account. Later, upon seeing [Zaman daily columnist] Sevgi Akarçeşme’s Periscope broadcast, I discovered Periscope has an application for smartphones and I tried to give lessons with a cell phone in my hand. Since then, I have been giving lessons every day. Yesterday, about 1,500 students were watching my broadcast on Periscope.”

“Thanks to our sponsor, the NT book and stationery retail chain, every day we give a student a book as an award for answering certain questions correctly. We also organize reading activities starting at 5:30 a.m. so that students can make full use of their time. Students take a picture of the book they are reading and tweet it while mentioning me. I retweet them. Between 30 and 40 people attend these groups. We also arrange live broadcasts with well-known people. We did one with Akarçeşme, [TV show host] Murat Yeni and [an engineer working for Twitter] İbrahim Okuyucu,” he adds.
Ekol says the atmosphere of the online class is very different from regular classes. “Students from all across Turkey are watching and commenting on the Periscope broadcast. Students like talking and learning at the same time. They also motivate me to teach more eagerly.”

Referring to the government oppression of prep schools, Ekol emphasized that doing something useful makes him feel better about the situation. “Both students and their parents are worried about the situation. After the Constitutional Court’s decision to annul the law [to shut down dershanes], a parent called me and said he is in fact more happy than us [dershane teachers] because he worries about his child’s future. Students of the Körfez prep school where I’m working rank among the highest in nationwide exams every year. If dershanes are shut down, all our hopes and efforts will be in vain. We have done nothing wrong. We are hoping for better times,” Ekol underlined.

“Tomorrow we will conduct a broadcast on Periscope with a Turkish engineer from NASA. Things are going great right now. I hope they remain this way,” he added.