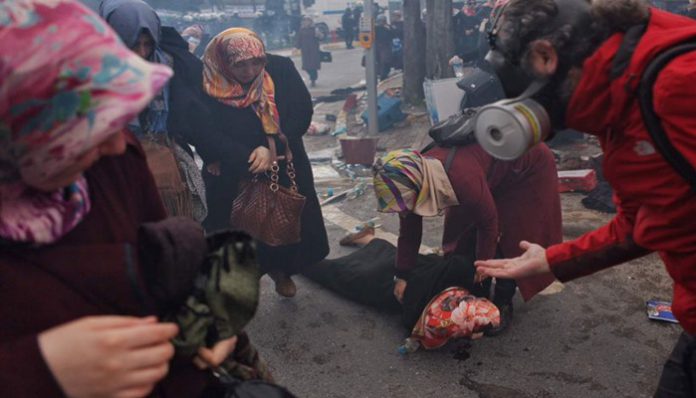 Turkey experienced an unsuccessful military coup attempt on July 15 following which the Justice and Development Party (AKP) government declared a state of emergency which is still in effect. The AKP government accused the Gülen movement of masterminding the coup attempt although the movement strongly denies any involvement.

Amnesty’s report said over 40,000 people were remanded to pre-trial detention during six months of the emergency rule in the country; there was evidence of the torture of detainees in the wake of the coup attempt; and nearly 90,000 civil servants were dismissed. Hundreds of media outlets and NGOs were closed down and journalists, activists and deputies were detained.

Following the coup attempt the government announced a three-month state of emergency, extended for a further three months in October, derogating from a list of articles in the International Covenant on Civil and Political Rights and the European Convention on Human Rights. The government passed a series of executive decrees that failed to uphold even these reduced standards. Nearly 90,000 civil servants including teachers, police and military officers, doctors, judges and prosecutors were dismissed from their positions on the grounds of links to a terrorist organization or threat to national security. Most were presumed to be based on allegations of links to Fethullah Gülen, a former government ally who the government accused of masterminding the coup. There was no clear route in law to appeal these decisions. At least 40,000 people were remanded to pre-trial detention accused of links to the coup or the Gülen movement, classified by the authorities as the Fethullah Gülen Terrorist Organization (FETÖ), Amnesty said.

According to Amnesty’s report, freedom of expression deteriorated sharply during the year. After the declaration of a state of emergency, 118 journalists were remanded to pre-trial detention and 184 media outlets were arbitrarily and permanently closed down under executive decrees, leaving opposition media severely restricted. People expressing dissent, especially in relation to the Kurdish issue, were subjected to threats of violence and criminal prosecution. Internet censorship increased. At least 375 NGOs, including women’s rights groups, lawyers’ associations and humanitarian organizations, were shut by executive decree in November.

In the report, Amnesty also cited the appointment of trustees to the Zaman Media Group in March 2016 in relation to an ongoing terrorism-related investigation.

After police stormed Zaman offices, a pro-government editorial line was imposed on the group’s newspapers and television channels. In July, Zaman group media outlets were permanently closed down along with other Gülen-linked media.

Torture and other ill-treatment

There was an increase in cases of torture and other ill-treatment reported in police detention, from curfew areas in southeast Turkey and then more markedly in Ankara and İstanbul in the immediate aftermath of the coup attempt. Investigations into abuses were ineffective, said the report.

The state of emergency removed protections for detainees and allowed previously banned practices that helped facilitate torture and other ill-treatment: The maximum pre-charge detention period was increased from four to 30 days, and facilities to block detainees’ access to lawyers in pre-charge detention for five days and to record conversations between client and lawyer in pre-trial detention and pass them to prosecutors were introduced. Detainees’ access to lawyers and the right to consult with their choice of lawyers – rather than state-provided lawyers – was further restricted. Medical examinations were carried out in the presence of police officers and the reports arbitrarily denied to detainees’ lawyers.

No national mechanism for the independent monitoring of places of detention existed following the abolition of the Human Rights Institution in April and the non-functioning of its successor body. The Council of Europe Committee for the Prevention of Torture visited detention facilities in August and reported to the Turkish authorities in November. However, the government did not publish the report by the end of the year. The UN Special Rapporteur on torture visited in November, after his visit was delayed on the request of the Turkish authorities.

The authorities professed their adherence to “zero tolerance for torture” policies but on occasion, spokespeople summarily dismissed reports against them, stating that coup plotters deserved abuse and that allegations would not be investigated. The authorities accused Amnesty International and Human Rights Watch of being tools for the “FETÖ terrorist organization” following the NGOs’ joint publication on torture and ill-treatment. Three lawyers’ associations that worked on police violence and torture were shut down in November under an executive decree.

Lawyers said that 42 people detained in Nusaybin in May after clashes between Kurdistan Workers’ Party (PKK)-affiliated individuals and state forces were beaten and subjected to other ill-treatment in police detention. They said that the group, which included adults and children, were hooded, beaten during police interrogation and not able to access appropriate medical care for their injuries.

Widespread torture and other ill-treatment of suspects accused of taking part in the coup attempt were reported in its immediate aftermath. In July, severe beatings, sexual assault, threats of rape and cases of rape were reported, as thousands were detained in official and unofficial police detention. Military officers appeared to be targeted for the worst physical abuse, but holding detainees in stress positions and keeping them handcuffed behind their backs, and denying them adequate food and water or toilet breaks were reported to have taken place on a far wider scale. Lawyers and detainees’ relatives were often not informed that individuals had been detained until they were brought for charge.