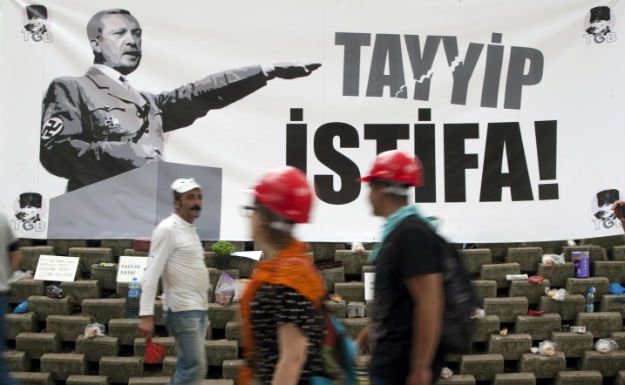 JONATHAN SCHANZER, MARK DUBOWITZ
Turkey’s Islamist government is being rocked by the most sweeping corruption scandal of its tenure. Roughly two dozen figures, including well-connected business tycoons and the sons of top government ministers, have been charged with a wide range of financial crimes. The charges ballooned into a full-blown crisis on Dec. 25 when three ministers implicated in the scandal resigned, with one making a dramatic call for Prime Minister Recep Tayyip Erdogan to step down as well. An exhausted-looking Erdogan subsequently appeared on television in the evening to announce a cabinet reshuffle that replaced a total of 10 ministers.

The gold trade has long been at the center of controversial financial ties between Halkbank and Iran. Research conducted in May 2013 by the Foundation for Defense of Democracies and Roubini Global Economics revealed the bank exploited a “golden loophole” in the US-led financial sanctions regime designed to curb Iran’s nuclear ambitions. Here’s how it worked: The Turks exported some $13 billion of gold to Tehran directly, or through the UAE, between March 2012 and July 2013. In return, the Turks received Iranian natural gas and oil. But because sanctions prevented Iran from getting paid in dollars or euros, the Turks allowed Tehran to buy gold with their Turkish lira — and that gold found its way back to Iranian coffers.

This “gas-for-gold” scheme allowed the Iranians to replenish their dwindling foreign exchange reserves, which had been hit hard by the international sanctions placed on their banking system. It was puzzling that Ankara allowed this to continue: The Turks — NATO allies who have assured Washington that they oppose Iran’s military-nuclear program — brazenly conducted these massive gold transactions even after the Obama administration tightened sanctions on Iran’s precious metals trade in July 2012.

Turkey, however, chose to exploit a loophole that technically permitted the transfer of billions of dollars of gold to so-called “private” entities in Iran. Iranian Ambassador to Turkey Ali Reza Bikdeli recently praised Halkbank for its “smart management decisions in recent years [that] have played an important role in Iranian-Turkish relations.” Halkbank insists that its role in these transactions was entirely legal.

The US Congress and President Obama closed this “golden loophole” in January 2013. At the time, the Obama administration could have taken action against state-owned Halkbank, which processed these sanctions-busting transactions, using the sanctions already in place to cut the bank off from the US financial system. Instead, the administration lobbied to make sure the legislation that closed this loophole did not take effect for six months — effectively ensuring that the gold transactions continued apace until July 1. That helped Iran accrue billions of dollars more in gold, further undermining the sanctions regime.

In defending its decision not to enforce its own sanctions, the Obama administration insisted that Turkey only transferred gold to private Iranian citizens. The administration argued that, as a result, this wasn’t an explicit violation of its executive order.

It’s possible that the Obama administration didn’t have compelling evidence of the role of the Iranian government in the gold trade. However, the president may have also simply sought to protect his relationship with Ankara and didn’t want to get into a diplomatic spat with Erdogan, who he considers a key regional ally.

If the administration didn’t feel that the sanctions in place at the time were sufficient to take action against Halkbank, after all, it could have easily shut down the gold trade by amending its executive order. But at the time, Turkey was also playing a pivotal role in US policy in Syria, which included efforts to strengthen the more moderate opposition factions fighting President Bashar Assad’s regime.

It’s also possible, however, that the Obama administration’s decision had less to do with Turkey, and more to do with coaxing Iran into signing a nuclear deal. In the one-year period between July 2012, when the executive order was issued, and July 2013, when the “golden loophole” was closed, the Obama administration’s non-enforcement of its own sanctions reportedly provided Iran with $6 billion worth of gold. That windfall may have been an American olive branch to Iran — extended via Turkey — to persuade its leaders to continue backchannel negotiations with the United States, which reportedly began as early as July 2012. It could also have been a significant sweetener to the interim nuclear deal eventually reached at Geneva, which provided Iran with another $7 billion in sanctions relief.

Indeed, why else would the administration have allowed the Turkish gold trade to continue for an extra six months, when Congress made clear its intent to shut it down?

This brings us back to the current corruption drama in Turkey. The ruling Justice and Development Party (AKP) has been claiming that it is a victim of a vast conspiracy, blaming everyone from Washington to Israel to US-based Islamic cleric Fethullah Gulen for its woes. Some Turkish media have pointed a finger at David Cohen, the Treasury Department’s undersecretary for terrorism and financial intelligence, who happened to be in Turkey as the news began to break. Erdogan even raised the possibility of expelling the US ambassador to Ankara, Francis Ricciardone.

But if the charges stand against the panoply of well-connected figures fingered, the AKP will have only itself to blame. While the gas-for-gold scheme may have been technically legal before Congress finally shut it down in July, it appears to have exposed the Turkish political elite to a vast Iranian underworld. According to Today’s Zaman, suspicious transactions between Iran and Turkey could exceed $119 billion — nine times the total of gas-for-gold transactions reported.

Even if the Turkish-Iranian gold trade represents only a small part of the wider corruption probe, the ongoing investigation could provide a window into some nagging questions about the relationship between Ankara and Tehran. Perhaps we will finally learn why the Turkish government allowed Iran to stock up on gold while it was defiantly pursuing its illicit nuclear program — and whether the Obama administration could have done more to prevent it.

Schanzer and Dubowitz work at the Foundation for Defense of Democracies.