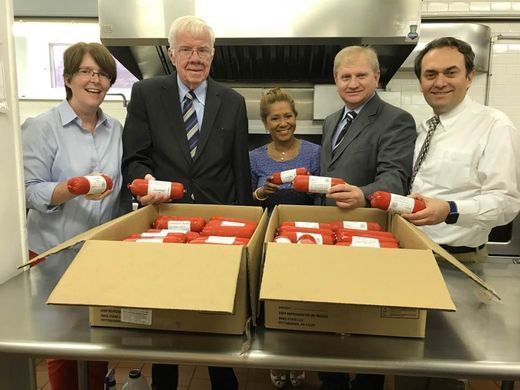 When volunteers at Toni’s Kitchen get together, it’s all about fostering friendships with one another while cooking for people who to get day-to-day meals.

On a Thursday morning this October, about a dozen volunteers did just that as they made 150 stuffed peppers for people in need, including low-income families and senior citizens.

The peppers were stuffed with meat the kitchen receives every year as part of an annual holiday tradition in the Muslim religion from the Peace Islands Institute, a nonprofit 501(c)3 organization. Founded by Turkish-Americans of North Jersey, the institute aims to promote peace and understanding among members of different religions.

Peace Islands Institute has a New Jersey branch in Hasbrouck Heights and other branches in Pennsylvania, New York, Connecticut, and Massachusetts. The institute first reached out to Toni’s Kitchen about five years ago, offering to donate the meat. The institute also donates meat to other food banks and pantries in North Jersey such as St. Peter’s Haven in Clifton.

In a statement, Giblin said, “The extreme generosity of the Peace Islands Institute during the observance of Eid al Adha demonstrates great community spirit and willingness to help families in need.”

Kevin Donahue, executive director at St. Peter’s Haven, said, “We like to serve meat as part of the package we serve people. The meat is an important part of the healthy diet.”

As part of the celebration, an animal — usually, but not always, a sheep — is slaughtered and the meat is given to family members and people in need.

“We celebrate with family and poor people in the neighborhood,” said Levent Koc, former executive director of the Peace Islands Institute. “It’s a time to stop and think about your neighbors and your relatives.”

Donating the meat is done not only to help those in the community who are less fortunate but also as a way to bridge cultural and religious differences between Muslims and non-Muslims.

“We were so impressed with the story behind the donation,” said Mernin.

Peace Islands Institute was created by Fethullah Gulen, a Turkish cleric who is exiled from Turkey and resides in Pennsylvania. He is the founder of the Hizmet movement, an organization focused on human values.

Turkish President Recep Tayyip Erdogan holds Gulen and his followers accountable for a 2016 insurrection in which about 300 people were killed when portions of the military staged a coup.

Koc noted that members of the Turkish community are inspired by Gulen’s ideas, but added that a main focus of the Peace Islands Institute is to promote understanding, respect, acceptance and diversity among residents.

“When we help, we cannot discriminate. We try to help all people,” Koc said.

Peace Islands Institute Executive Director Ercan Tozan said he reaches out to churches and synagogues about projects and community-based activities the institutions can do together.

Tozan said Peace Islands Institute has organized many events since the group was founded in 2003, originally as the Interfaith Dialogue Center, and continues to do so today.

“We’re still trying to reach out. I’ve knocked on doors at churches and synagogues and have met with new reverends and pastors,” Tozan said.

Annual Thanksgiving dinners; Ramadan dinners; Abraham Table Discussion programs, in which leaders from different religions discuss a topic from their religions’ standpoints; and “friendship gatherings,” which offer community activities after Islamic services, are among community activities and events Peace Islands Institute has initiated.

Peace Islands Institute also has more than 100 volunteers who help out in places such as food banks.

It is organizing an essay contest for middle and high school students.

“Basically, all religions promote peace and love,” Tozan said. “No matter what, you have to bring people together to get to know each other.”

As for feeding people with the donated meat, volunteers from Toni’s Kitchen enjoyed both cooking it and working with one another to help others.

“I’m having a great experience here,” noted Rios as she waited for the meat to finish cooking so it could be added into the peppers along with carrots and seasonings.