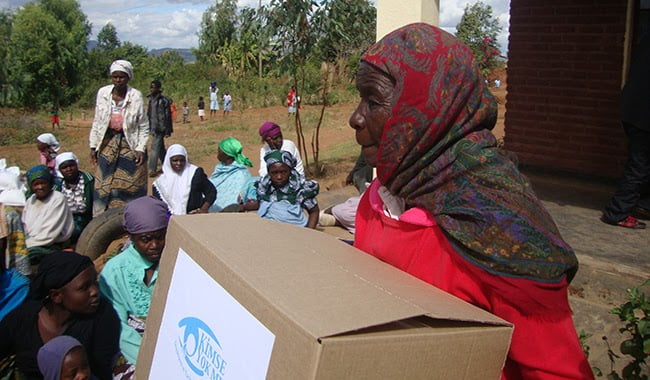 The Afghan-Turkish Schools, in cooperation with Kimse Yok Mu Foundation (KYM) distributed Eid al-Adha meat to locals in 20 different provinces across Afghanistan. President of Afghan-Turk Cag Educational Institutions, Numan Erdogan spoke to Cihan News Agency: “As of today, we’ve been slaughtering sacrifice animals to be distributed in 20 different provinces across the country. Kimse Yok Mu foundation’s contributions alongside Turkish and Afghan businessmen’s made this possible.”

“As KYM volunteers, we are here to observe Eid al-Adha with our Afghani brothers. It feels great to volunteer here. A total of 1,400 sacrifice animal shares sent from Turkey are going to be distributed to some 10 thousand families in various locations” said a KYM volunteer.

Kimse Yok Mu aid and relief foundation, which provides Eid al-Adha aid in some 140 countries annually, channeled 1,450 sacrifice animals to Nigeriens through the local Bedir Schools, the second most impoverished country in the world.

The meat was distributed to 70 thousand underprivileged families predetermined by the officials. Volunteers from Turkey and European countries were involved in the distribution of the meat in the cities Niamey, Agodes, Zender, Maradi, Daffa and several others. Next, the volunteers went on to visit the local orphanages and nursing homes, where they delivered eid gifts for children as well as food and monetary aid for the nursing home residents.

General Manager of Bedir Schools operating in Niger since 2003, Resul Ekrem Bilge, said “As a team of 25 Turkish and 80 Nigerien teachers, we are happy to be involved in aid activities in addition to education. We aimed to provide sacrifice meat to 350 thousand people, which we have achieved with God’s help.”

KYM Palestine and Middle East Director Harun Tokak reported they delivered aid to the predetermined families in need, in cooperation with local officials and volunteers from Turkey and Palestine. Ramallah-El Bira district governor Dr. Laila Ghannam, vice-police chief Bashar Barghuti and deputy mayor Abu Mahmoud Shalta, who were present during distribution of the aid, expressed their gratitude to Turkish people for their contributions. They noted that these aid activities help the long-existing friendship between the two nations grow increasingly.

The sacrifice meat by Kimse Yok Mu have been delivered to the needy in southern Thailand. As an expression of their gratitude, “On behalf of the Pattani Muslims, I would like to thank Kimse Yok Mu foundation for the sacrifice animals. I had the opportunity to visit the foundation during an international conference in Turkey. We are ready to make this aid campaign expand into more locations in the south. We genuinely hope more people benefit it as the aid increases. With this aid organizations, you Turks are making a history,” Pattani Mufti said.

In the densely Muslim-populated regions in the southern Thailand, the sacrifice animals provided to 45 different mosques by KYM were slaughtered on October 15th. The local imams and KYM officials had previously came together at the governor’s building in order to determine aid recipients in need.

The largest aid organization in the region

“Eid al-Adha is greatly cherished in this region. It symbolizes love, solidarity and sharing. It also presents an example for the next generations,” Pattani Governor Vitaya Panichpong said. He further noted that there had been small-scale Eid al-Adha organizations in the region, none of which involved the governor’s office. “KYM’s campaign has been the largest one carried out in cooperation with the governor’s office,” the governor continued.

These sacrifices will bring peace here

“First of all, I would like to thank those who sent these animals here. The blood from these sacrifice animals poured into these lands. I believe these sacrifices will contribute to the peace in the region,” a Thai businessman, Waedaoh Waeduereh remarked.