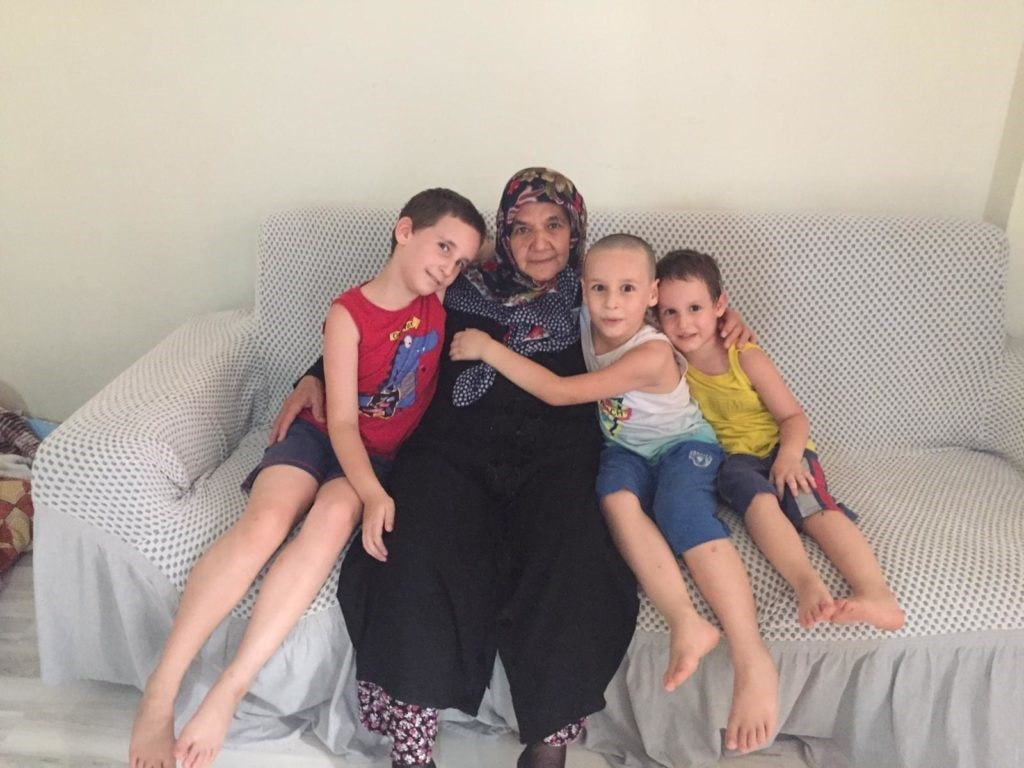 The Özonur brothers with their grandmother

Their parents are imprisoned as part of the sustained purge, which has been carried out since a coup attempt on July 15, 2016 and in which some 150,000 civil servants have been dismissed from state jobs and almost 600,000 people investigated, with half of them detained or arrested on trumped-up terrorism-related charges.

Enes, Mesut and Tarık have been fatherless since February 12, 2017, when their father, Murat Özonur, was arrested on accusations of membership in the Gülen movement, a faith-based dissident group and the nemesis of Turkey’s President Recep Tayyip Erdoğan.

The post-coup purge, although negatively affecting all dissident groups, hit the movement, inspired by US-based cleric Fethullah Gülen, whom President Erdoğan accused of masterminding the failed coup, the hardest. Gülen categorically denies any involvement in the coup attempt.

Their mother, Dilek Özonur, was arrested on May 28, 2020 on similar charges. They are being held in separate prisons in the Aegean city of Manisa, where the Özonur family lives. The three children have been left to the care of their grandmother (70) and grandfather (72).

“I feel at a loss as to how to console them,” says the grandmother, adding, “Since I myself am unable to grasp why their parents were arrested, how can I get them to make sense of their situation?”

“My daughter and son-in-law were wrongfully and unjustly arrested. I cannot express how sad I am. I cry every day without letting my grandsons know it. We try to look after them without hurting their feelings or breaking their hearts. Had their parents deserved this punishment, I would not have felt so heartbroken.”

Although gaining momentum after the abortive coup, the persecution of members of the Gülen movement started well before it. President Erdoğan began to target the Gülen movement after what is widely known as the December 17 and 25, 2013 corruption investigations that implicated him, four of his ministers and his close associates.

Dismissing the investigations as a Gülenist plot aimed at overthrowing him, Erdoğan whitewashed the accusations, purging and eventually imprisoning all the police officers and prosecutors involved in the probes. Then he designated the movement a terrorist organization and deemed any connection to the movement on par with membership in a terrorist organization, thereby making Gülenism a crime by association.

Dilek and Murat Özonur were convicted of membership in a terrorist organization, that is, the Gülen movement, based on informant testimony and the use of a messaging application called ByLock. Dilek was sentenced to six years, three months and Murat to eight years. Their sentences were upheld by the Supreme Court of Appeals, which means the Özonur brothers will be separated from their mother for four years and from their father for three more years in accordance with Turkey’s regulations on the execution of sentences.

“They know their parents are in prison and that people who commit crimes such as theft and murder are sent to prison. The younger ones behave very maturely; yet they avoid speaking. Sometimes they wonder why their parents are there and what they did to deserve being locked up,” says the grandmother.

The Özonur brothers are not an exception. There are many other children who have been likewise separated from their parents. Caught between loving their grandchildren and caring for them, the grandparents who have to take care of their young grandchildren despite their advanced age and in some cases serious disease, making them dependent on the help of others, have also suffered some sort of trauma.

Ahmet Eşref Deveci, 5, is another example. After his parents Abdullah and Dilek Deveci were detained in the southeastern city of Gaziantep on July 8, 2020 on accusations of membership in the Gülen movement and formally arrested shortly thereafter, he was handed over to the care of his grandparents, with the grandfather struggling with bladder cancer for the last six years.

The two sons of Emine and Hamit Eker are another case in point. They have been taken care of by their grandmother Zeynep and grandfather İdris since their parents were arrested on March 9, 2018 and sentenced to eight years, six months in prison on Gülenist charges. Their sentences were also upheld by the Supreme Court of Appeals.

Ömer (14), Nihal (10), Bilal (8), Fatma Nur (5) have also been left behind by their imprisoned parents to be looked after by grandparents. They have been living with their grandparents Ümmü and Ali Tüter in the Aegean city of Denizli for three-and-a-half years, since their parents, Kamile and Ali Tüter, were arrested on July 28, 2016. They are incarcerated in separate prisons in two different cities hundreds of kilometers apart, the mother in İzmir, the father in Afyon.

In some other cases, children have to accompany their mother to prison if they are too young or lack someone to look after them. Azra Kaya, the one-and-a-half-year-old daughter of Leyla Kaya who is still being breastfed, had to accompany her mother to prison. Her mother was detained in Bursa on July 9 and arrested the next day, also on charges of Gülenist links.

The detention and arrest of pregnant women and mothers with young children have seen a dramatic increase in the aftermath of the coup attempt. Currently, more than 700 infants are currently accompanying their mothers in Turkish prisons.

The post-coup purge is continuing unabated despite objections by international courts and organizations. A UN body recently found that people with alleged links to the Gülen movement are being targeted on the basis of their political or other opinions, constituting a prohibited discriminatory ground according to UN human rights conventions.

According to the same body none of the activities attributed to members of the Gülen movement could be construed as criminal acts, but rather as the peaceful exercise of rights granted under human rights treaties, finding that the deprivation of liberty due to Gülen links on similar grounds was arbitrary and lacked a legal basis.