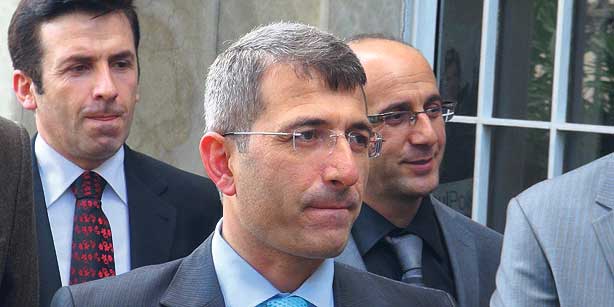 Prosecutor Muammer Akkaş, who was removed from a corruption investigation, said that he was under pressure and was prevented from doing his job. (Photo: Today's Zaman)

After the [Turkish] government took a new graft probe from prosecutor Muammer Akkaş — a move that could further cast a shadow over the corruption investigation — he told media that the case was taken from him without any reasons being cited, effectively blocking him from doing his job.

“All my colleagues and the public should know that I have been prevented from doing my duty,” the prosecutor said in a statement sent to media outlets on Thursday.

Akkaş is known for his work on sensitive cases like the Ergenekon coup plot and the murder of the Turkish-Armenian journalist Hrant Dink.

On Wednesday, the İstanbul Chief Public Prosecutor’s Office ordered the detention of 30 suspects, including a number of deputies and businessmen. The İstanbul Police Department, which saw an extensive purge of its top officers over the last week, has not complied with the order, however.

Akkaş was leading the investigation, which is seen as the second round of a graft probe that has shaken Turkey’s political establishment.

Early media reports claimed that the investigation concerns al-Qaeda operations in Turkey as well as business deals in which deputies and public officials are involved.

Akkaş gave the order to detain the suspects to the İstanbul police in the afternoon. The police, however, did not immediately comply; the İstanbul Police Department did not assign a team to carry out the mission.

It becomes a necessity to deliver this statement due to pressure I faced during the investigation that I led.

I have been leading an investigation into allegations of a criminal organization being formed for tender rigging, bribery, abuse of power, forgery of documents, intimidation and other crimes such as violation of Law No. 2863, that involve several well-known figures and some public servants. Yesterday morning [Wednesday], I submitted search, seizure and detention decisions by a court to the İstanbul Police Department in order to collect the pieces of evidence before they are eradicated. I noticed in media and some Internet websites names of the some of the suspects who were supposed to be detained and that the pieces of evidence were being destroyed. On the same day, I noticed that the court decision and the decision to detain the suspects were not carried out despite my meeting with police chiefs who were supposed to take part in the operation in the courthouse at 7:00 p.m.

For this reason, open pressure was put on the judiciary through the Chief Public Prosecutor’s Office as well as security services who are responsible for implementing the decisions of prosecution, and the implementation of court decisions were prevented.

By not implementing the court decisions, police chiefs committed a crime. An opportunity was given to suspects to take measures, escape or mitigate the evidence.

As a member of the judiciary that is expected to act as independent and neutral as one of the three basic branches of the state, we are expected to do what is necessary within the authority granted to us against crimes and those who committed a crime.

Our duty is not to ignore the violation of rights of the nation by fearing and holding back because of pressure but to realize our duty in the best way in a bid to protect the rights of our nation.

In this difficult process, I expect the whole legal community, particularly senior law workers, to defend the independence of the judiciary.