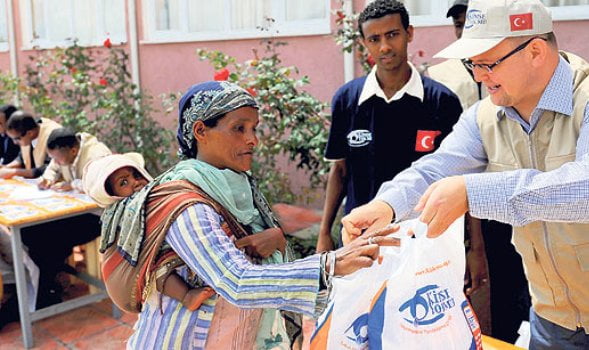 Somali Ministry of Foreign Affairs Undersecretary Abdi Dirshe denied on Friday allegations that no donations were ever sent to a camp located in the capital of Somalia by Turkish aid organization Kimse Yok Mu, stating that they have never worked with Kamil Kemak Güller, who was allegedly the source of the article in the Sabah daily which carried the claims.

The Sabah daily published an article on Feb. 10 claiming that Kimse Yok Mu — a charity based on the Hizmet movement inspired by prominent scholar Fethullah Gülen — never sent any aid packages to camp number seven located in Mogadishu. The camp was closed down by the United Nations seven months ago due to security reasons.

The claim was also denied by the person in charge of the camp, Ibrahim Abdinur Muhammed, demonstrating that defamatory activities are being conducted by pro-government media outlets against Hizmet movement.

Muhammed said the organization had helped 450 families living in the camp and that it continues to send assistance to the camps in six other locations in Somali in the form of health and food supplies and clothing as well as education tools.

The article in the Sabah daily had said after Turkish Prime Minister Recep Tayyip Erdoğan paid a visit to Somalia in 2011, a donation of approximately TL 450,000,000 was collected and a board, including Güller, was formed to keep track of how much of the donations could reach the country and whom they were sent to. Güller allegedly said none were sent to camp number seven by Kimse Yok Mu.

However on Friday, the undersecretary of the ministry of foreign affairs denied defamatory allegations and having ever worked with Güller.