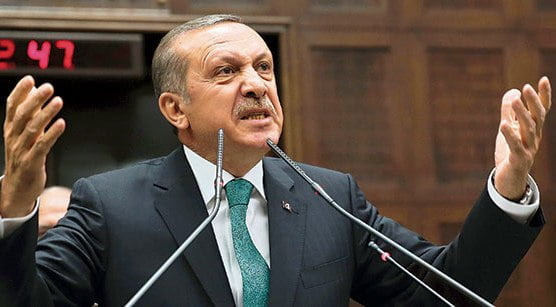 The harsh rhetoric of Prime Minister Recep Tayyip Erdoğan denouncing some groups as a “parallel state” following a corruption scandal that erupted a month ago has raised concerns among business associations and civil society organizations that Turkey’s national brand will be tarnished abroad.

In a press conference on Thursday, members of the Federation of the Aegean and Mediterranean Industrialists and Businesspeople (ESİDEF) said the negative language used by Erdoğan against the Hizmet movement, inspired by Turkish Islamic scholar Fethullah Gülen, which has been flying Turkey’s flag all around the world, has upset them. ESİDEF, which has a total of 12,500 businessmen and industrialists, is one of the biggest regional civil society organizations.

Speaking during the press conference, ESİDEF President Mustafa Özkara said: “Top government officials, who during the Turkish Olympiads only six months ago called the Hizmet movement the ‘peace movement of the century,’ now define the same movement as a ‘parallel structure,’ a ‘gang,’ a ‘criminal organization’ and even Hashashins. We are watching the defamation campaign being conducted against the movement with astonishment.”

Özkara also said the fact that Erdoğan had ordered ambassadors during an ambassadors’ conference last week to defame overseas Turkish schools, which have become a Turkish global brand, in the countries they serve deeply hurts the sense of community.

During a parliamentary group meeting on Jan.14, the prime minister accused the Hizmet movement of orchestrating a wide-reaching corruption and bribery investigation which has implicated some members of the Justice and Development Party (AK Party) government.

Increasing the intensity of his criticism this time, the prime minister likened the Hizmet movement to the Hashishin, or Hashashim, a religious sect of Shiite Muslims originating from Persia. The group, thought to have been active between the 11th and 13th centuries, reportedly carried out politically motivated assassinations after consuming hashish. They usually targeted Muslim rulers. The word “assassin” is derived from the Hashishin.

Özkara said the movement should not be stigmatized by words such as gang or criminal organization, adding that what is currently taking place will negatively affect the future of Turkey. “The incidents taking place in recent days hurt the education volunteers serving loyally in 180 countries. Those people are working for the ideal of a greater Turkey.”

In response to the reassignments of police officers and prosecutors and a draft bill to restructure the country’s Supreme Board of Judges and Prosecutors (HSYK) following the corruption scandal, the federation said it was concerned by the recent incidents which show that Turkey has been moving away from a state of law and democracy.

Meanwhile, Erkut Yücaoğlu, the president of the Turkish Industrialists and Businessmen’s Association’s (TÜSİAD) High Advisory Council, said on Thursday that the rule of law in Turkey was harmed when the government became locked in a feud with the judiciary. Claims that there is a “state within the state is staging a coup” and that the “corruption allegations are being covered up” have raised questions about the credibility of the judiciary and the country’s judicial system, he said, stressing that this situation has greatly damaged the separation of powers. This has negatively impacted foreign investors’ perspective of Turkey, Yücaoğlu added

TÜSİAD President Muharrem Yılmaz also said foreign investment will not be made in a country where there is no respect for the rule of law, where legal codes conflict with European Union rules, where public procurement laws have been amended dozens of times and where companies are pressured through tax fines.

The TÜSİAD president’s warning about the government’s mishandling of the ongoing corruption investigations, the third since the corruption scandal hit Turkey on Dec. 17, indicates growing worry in the business community over the prospect that the Turkish economy will be hurt by increasing political uncertainty as the government tries to derail investigations by reassigning police and members of judiciary en masse, as well as changing the laws pertaining to the judiciary.

Faik Öztrak, main opposition Republican People’s Party (CHP) deputy chairman in charge of economy, said on Friday that there has been a fragile economic environment since May, which can turn into a crisis at any moment.

Öztrak stressed during a press conference in Ankara that the corruption scandal which hit the country on Dec. 17 has devastated the economy. “It is no longer possible to relieve the markets [with words or distractions],” added Öztrak.

Commenting on TÜSİAD’s statements stressing that businessmen are uneasy about the political situation in Turkey, Öztrak said that TÜSİAD’s warnings show that the current economic conditions are no longer tolerable.

On Dec. 17, İstanbul and Ankara police staged dawn raids and detained 52 people as part of a major investigation into claims of corruption and bribery. Among the detainees were bureaucrats, well-known businesspeople and the sons of three Cabinet ministers. On Dec. 25, another major corruption investigation, implicating the prime minister’s son, Bilal Erdoğan, as well as prominent businesspeople close to him, was stalled when the government ordered the police to defy court orders.

The business association head also repeated his criticism of a planned amendment to the Internet law, part of an omnibus bill that was approved by the parliamentary Planning and Budget Commission, saying it could pave the way for an increase in Internet censorship.

The Buca Education, Culture and Aid Association (BEYDER) released a written statement on Friday in which it reacted to defamatory expressions targeting the Hizmet movement. “The movement, which has captured many hearts in 180 countries around the world, is being depicted as though it is a dangerous community by the country’s administration and some pro-government media outlets. This is unacceptable,” the association stated.

Six civil society organizations in Mardin province held a joint press conference on Thursday to slam the defamation campaign against the movement. Speaking on behalf of these six organizations, Kızıltepe Active Industrialists and Young Businessmen’s Association (KASGİAD) President Seyithan Karaozan said it is anti-democratic and destructive to try and destroy the Hizmet movement, which based on universal humanitarian values and coexistence. “Defamation campaigns against people who win the hearts of other should be stopped and a peaceful environment based on a rule of law should be established,” Kazaozan added.

Similarly, eight civil society organizations in Uşak province issued a press statement on Thursday criticizing the mudslinging campaigns against the Hizmet movement. “The negative developments and discriminatory and harsh rhetoric discrediting Turkey in the eyes of the world are distressing and raise concerns about the future and unity of the country. When the good work of the Hizmet movement both in Turkey and overseas are apparent, the offensive statements [about the movement] hurt a large segment of society,” said Uşak Technicians Association President Umut Döngel on behalf of the eight organizations.

Meanwhile, 44 civil society organizations in Kahramanmaraş held a press conference on Friday stating that the recent developments have created polarizations in society. Representative of the organizations stressed that defamation campaigns against the Hizmet movement are harmful.