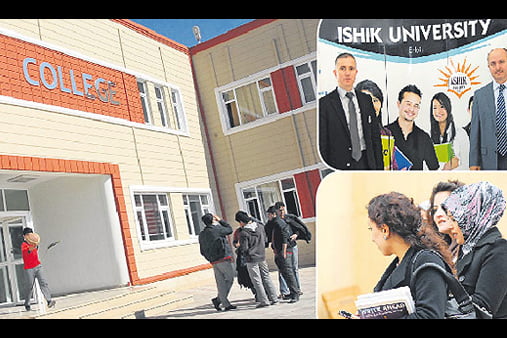 One of Ishik Schools in Northern Iraq

Iraq has been experiencing unrest for seven of the last 30 years. The Halabja massacre, the US invasion, the overthrowing of Saddam Hussein, the sectarian conflicts and the problems concerning how to share political power have split the country into three regions, although not de jure: the Shiites to the south, the Sunnis in and around Baghdad and the Kurds to the north.

Children from a variety of ethnicities and religious groups attend these schools and sit side by side, scattered all across Iraq. Sunni, Shiite, Christian, Assyrian and Yazidi students study together in the classroom and play together in the schoolyard. Ismail Rashid, Abdullah Abdurrahman and Muhammed Kaya, born to Arabic, Kurdish and Turkmen parents, respectively, are listening to their teacher, Ferhan Demirkol, in the same classroom. Muslim Muhammed Hussein Taha and Assyrian Adam Ninos Nemrut are trying to solve the same math problem together.

Turkish schools have been operating in Iraq since 1994, and they offer educational services, the quality of which surpasses international standards. The students who graduate from these schools are able to speak at least four languages. With a fluency in Turkish, Kurdish, English and Arabic, these students can get ahead of their peers. Turkish students sing Kurdish songs and Kurdish students write Turkish articles perfectly.

Feza Educational Institutions, with which Ishik schools are affiliated, have 20 schools in Dohuk, Arbil, Sulaimaniya, Soran, Halabja, Mosul, Kirkuk, Baghdad and Ramadi and a university in Arbil. Of these schools, 14 are under the jurisdiction of the Kurdistan Regional Government. Some 6,500 students attend these schools, where 325 teachers from Turkey are working with their Iraqi counterparts to prepare these students for the future.

Feza Educational Institutions General Director Talip Öztürk identifies the fundamental mission of these schools as “brotherhood and dialogue” and asserts that Ishik schools are Turkey’s biggest brand in Iraq. He underlines that they embrace everyone regardless of ethnic or religious differences. “These schools also act as the cement of Iraq’s integrity. Turks, Kurds and Arabs study side by side. Actually, even the prejudices of the people living in the western provinces of Turkey may be eliminated by northern Iraq,” he asserts.

Feza Educational Institutions Deputy General Director Fatih Cingöz notes that they appeal to all groups in Iraq. Noting that the schools are completely full, operating beyond their capacity, Cingöz says they regretfully have to decline many students.

The Turkish schools in Arbil are like gardens abloom with flowers of variegated colors. The Ishik Secondary School has 550 students and its director, Sefa Kasap, is a native of Arbil. He stressed that the Ishik schools represent the only institutions in the region that host diverse nationalities, religions and sects. “We are implementing a brotherly education. We are trying to endow our students with a better future and fine morals,” he says.

The father of Rashid, a 12-year-old Arab student attending the preparatory class at Ishik Secondary School, is a former deputy from the Hizb-Islami party. Ismail worked hard to pass the selection exam and he is now happy to be admitted to the school. He is praying to God so that his two brothers are also admitted to Ishik schools. He says thanks to his teachers, he is one step closer to his dream of being a pilot and his biggest dream is to see Turkey.

Abdullah Abdurrahman, a Kurdish boy whose father is an engineer, has enrolled in the school in order to learn Turkish. Describing Turkey as a “comfortable and beautiful country,” Abdullah explains that he wants to become a physician and serve his country. He is apparently fond of the good relations among the students. “I feel sad every day before I leave my friends,” he says.

Muhammed Kava from a Turkmen family in Arbil also draws attention to the friendly atmosphere at the school. He stresses that there is a spirit of camaraderie as they sit side by side. “Both my teachers and my friends are very good. I want to be a good computer engineer by having a good education here,” he says. He also wants to be a lawyer like his father.

Lezan Midhat from a Christian Kurdish family dreams of becoming a pilot. He says the solidarity at Ishik schools is found nowhere else. Muhammed Ismail Taha, a Sunni Arab student, is fascinated by the school teaching four languages. Taha wants to manage an international company. “My teachers and friends are very good. I always think of good things when Turkey comes to mind,” he says.

Adam Ninos, who is Assyrian, underlines the fact that Ishik schools do not discriminate between nations or religions. He points out that he has never encountered any problem in this respect and he has always been supported by his teachers and friends.

Another educational institution that offers quality education in Iraq is the Nilüfer Girls High School. This school has students from all nations and religions in the country. Sandra Sermed, a Christian Arab girl, Hacer Ala, a Sunni Arab girl, Midya Abdulvahap, a Turkmen girl, and Sevgi Salar, a Kurdish girl, all attend the same class. They all are friends with Zeynep Akar, who was born in Turkey. They study together and take breaks together and play volleyball together in the schoolyard.

The quality of education at the school, the sacrifices their teachers make and the warmth of their friends have filled their hearts with love for Turkey. “Turkey is a good country as it opens such schools,” says Salar.

It is equality we experience here

Hacer Ala (a Sunni Arab in grade 10): There is no discrimination here. We are all equal. We are one. We study peacefully at the country’s most successful school.

Sevgi Salar (a Kurd in grade 10): There are no such schools in our country. I have friends from different nationalities. It is nice to be with them. Turkey is a good country as it opens such schools. If my parents permit it, I would like to attend a university in Turkey and become a physician.

Midya Abdulvahap (a Turkmen in grade 10): Our school ranks the first in Iraq. People compete with each other in order to attend these schools. We are lucky because we are entitled to study here. We learn English, Turkish, Kurdish and Arabic. Outside, people just look at how we speak and act and know that we are attending Ishik schools.

Sandra Sermed (a Christian Arab in grade 10): I have come to this school in order to learn foreign languages. I started to love my school with each passing day. Our teachers are very good. I have been here for six years and I have been consistently treated well. I have experienced no difficulty. It is good to attend a school with my friends from different cultures. We also see each other outside the school. Our families see each other as well. We pay visits to each other. I dream of visiting Turkey soon.

Nigerian Turkish Nile University, in its vision, hopes to grow into a vanguard university that gains the respect of the world through academic excellence by providing the highest quality university education for students from around the globe. Located in the heart of Abuja, the nation’s capital, the NTNU boasts of a clean academic environment and a friendly atmosphere.