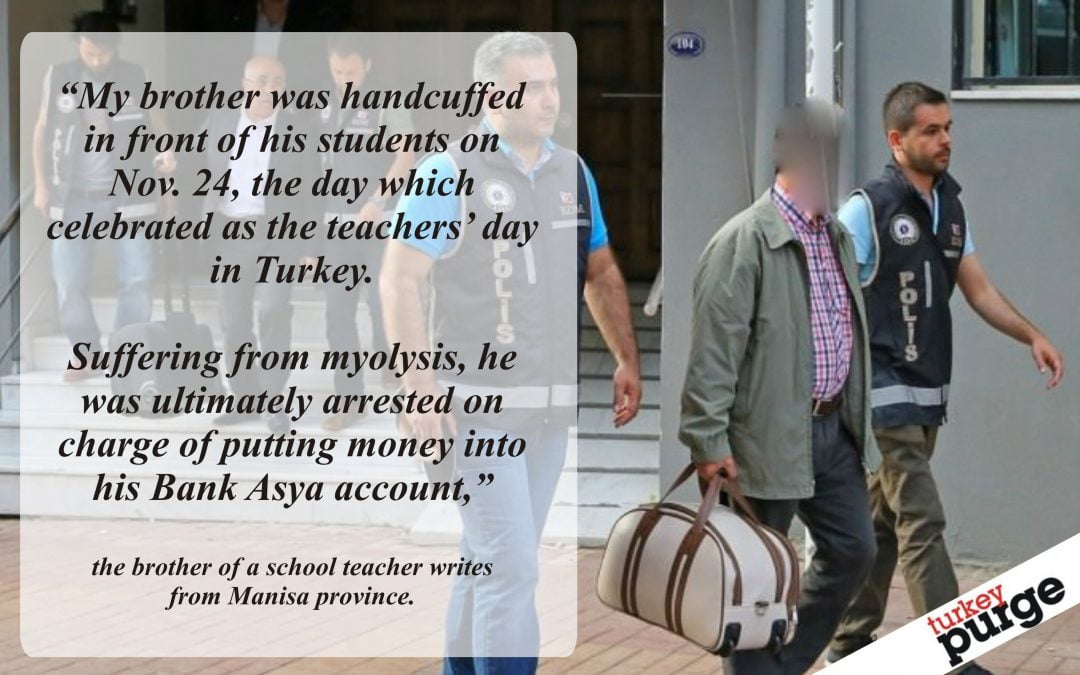 The widening government crackdown against the Gülen movement proves not to be new to the post-coup period as personal stories shed light on what the latter has been facing in terms of oppression.

The teacher Y.D. was arrested after prosecutor found out that he had put money into Gülen-affiliated Bank Asya and has been held in Manisa F-Type Prison since then.

Below is the translation of the letter of his brother.

“Even if I sleep for 40 years, I probably would not be able to even dream of what we have got through in the past year.

My brother worked as a teacher at several schools after graduation. He has had even no traffic ticket issued against him so far.

He has had no business with police and prosecutors until recently. He occasionally saw faces of them as the parents of his students.

My brother was detained with his hands cuffed, in front of his students on Nov.24, the day which is celebrated as the teachers’ day in Turkey. The reason police showed us was putting money into his account at a legally-established finance institution which was opened after a ceremony attended by numerous state officials, then Prime Minister and several ministers.

My brother was among some 10 teacher and housewives detained the same day. What made us sad most is that he was detained before his students on teachers’ day.

He was ultimately arrested by the court after days under custody. He was put into the cell in winter. He survived the winter by wearing all clothes at once as heating was not enough to warm the cell.

My brother has been fighting myolysis. It has become a huge burden that he was forced to go up and down for a few times a day as the prison was a dublex compound. Even though he had no risk of escape, he was not allowed to be released and tried on probation.

My brother and his wife were undergoing medical treatment to have a child. His wife finally got pregnant. But she was torn up and got sick after the husband’s unfair detention which led her have a miscarriage.

What I told here is just the tip of an iceberg comparing to the difficulties facing those under arrest right now, the letter concluded.”

Emre Uslu, Friday January 20, 2012 When the Justice and Development Party (AKP) received 50 percent of the votes in the 2011 election and came to power by promising to make a new constitution, expectations were raised to expect a transformation of the system. But if you consider the aftermath of the elections, one cannot […]