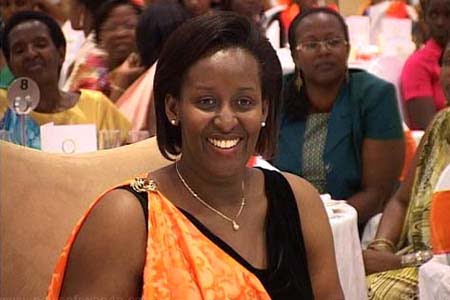 The First Lady, Jeannette Kagame, on Monday received the proprietor of Hope Kids Academy, an international Turkish school that opened its doors in Kigali in February.

The school, located in Kigali’s prime suburb of Nyarutarama, is under the management of Reca Ltd, a Turkish business firm.

According to a statement released by Reca Ltd, the meeting aimed at introducing the company’s activities in the areas of education, business, and social and health projects.

The Turkish company invested in Rwanda following President Paul Kagame’s visit to Turkey in March 2011, where he met several Turkish business community members and invited them to explore business opportunities in the country.

“We would like to start some regular health projects with volunteer doctors and health workers from Turkey, possibly in cooperation with Imbuto Foundation,” Alkis said in the meeting.

According to Alkis, Reca Ltd has been engaged in several activities in the country including among others social, education, health, culture and business concepts.

The company has plans to set up an international university in the next few years.

The academy has both nursery and primary sections. The initial class of 2013 had about 40 pupils enrolled, but the institution is targeting a maximum of 100, the capacity of the school temporary premises.

The school plans to have a permanent facility that will accommodate 1,000-1,500 students and says it will open a high school and a university in two years to come.

Among other Turkish businesses that have set up shop in Rwanda in the recent past is Turkish Airlines which started flights to Kigali last year.