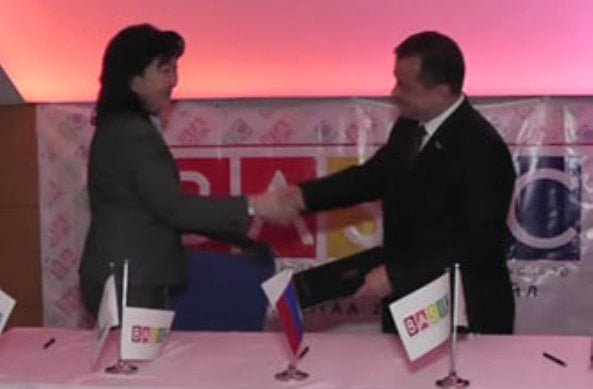 Turkish school’s alumni in Mongolia have launched the businessmen association Businessmen of the Land of Blue Sky (BASIC).

TUSKON’s Mongolian partner to be, BASIC had its inauguration at Blue Sky, one of the most luxurious hotels in the capital Ulan Bator.

The event saw a large attendance of the business people. Among them were Turkey’s ambassador to Ulan Bator, Turkish businessmen, Azerbaijani investors along with numerous Mongolian businessmen.

The guests enjoyed the traditional instrument Morin Huur performance along the dinner. The association’s officials introduced their initiatives. Business agreements between the partners followed the peaceful and friendly remarks by foreign and local businessmen.

BASIC President Ulambayar Otgon said, “This ceremony introduced our association to the business world. We have TUSKON members and Azerbaijani businessmen too with us tonight. We have signed agreements.”

Turkish schools’ alumni around the world continue to contribute to the global peace.

Afghan-Turkish schools are source of pride for the country as they won 147 medals this year at international Science olympiads. They won 75 medals last year. The Education Minister made a speech underlining that Turkey had always helped his country in education. He said, “Today, this ceremony’s purpose is to celebrate the efforts the students show and the high quality education these schools provide.”