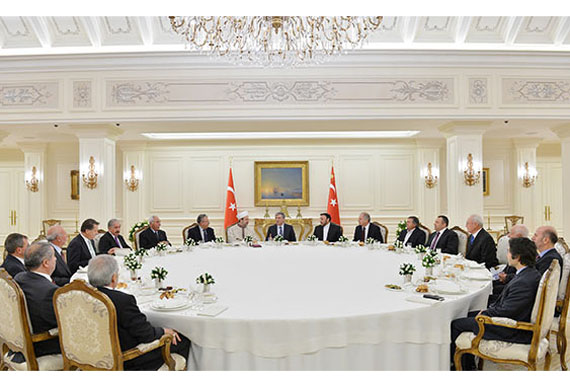 President Abdullah Gül (C) on Monday hosted an iftar (fast-breaking dinner) at the Çankaya presidential palace for representatives of the country's Alevi and Shiite communities to mark a period of morning during the Islamic month of Muharram. (Photo: Cihan)

The democratization package unveiled by the governing AK Party (Justice and Development Party) on Sept. 30 further disappointed already discouraged Alevis who have been expecting the state to officially recognize their houses of worship in accordance with other steps taken to equate all faiths in the country and this frustration led a significant number of them to march in support of their demands on Nov.3.

When criticized for not taking any steps to meet the Alevi demands in the democratization package, the government defended itself, arguing that no such measures were taken because Alevis have been unable to reach a consensus among themselves on their demands from the state.

Alevi Bektaşi Federation President Selahattin Özel says that the state should stop building mosques in Alevi villages and urges the state to recognize cemevis as the prayer place of Alevis. Raising a related point, the chairman of the Pir Sultan Abdal Association, Kemal Bülbül, who organized the rally on Nov. 3 in support of Alevi demands, says that the state does not deliver services to Alevi villages unless the residents agree to the construction of mosques in their villages.

The primary demand of all Alevis, regardless of their political stance, seems to be state recognition of cemevis as prayer houses. “Who among the Alevis thinks differently when it comes to cemevis?” asks Özel, as he says that the same sort of disagreements exist among Sunnis, but the state does not remain indifferent to their issues. He urges the state to identify any more substantial disagreement among Alevis.

Stating that Alevi civil society made some collective decisions on Aug. 31, 2002, Professor İzzettin Doğan, the head of the CEM Foundation, lists those common demands as equal citizenship, a salary and social security for Alevi spiritual leaders, or dedes, as there currently is for imams, legal status for cemevis, allowing Alevis to talk about their faith on national TV and the opportunity to study the traditional stringed-instrument, the saz, as an elective course in schools.

Reiterating that there were some articles that the government and Alevis agreed on, president of the Anatolian Alevi Bektaşi Federation, Cengiz Hortoğlu, said that when the democratization package did not deliver what the Alevis had expected, there was great disappointment. But he added: “We do not need the approval of the state, a prayer place is something private. The state only allocates places for mosques in the zoning plans.” According to Hortoğlu, the state should take the people’s preferences into consideration and not give preference to one group over another.

A young Alevi businessman who wants to remain anonymous agrees with the demands, saying that Alevis should receive their share from the state and that cemevis should be officially recognized as a place of prayer. “The state should treat mosques and cemevis equally or let the religious communities govern themselves,” he adds.

Özel also says that in order to address Alevi demands, all the parties in Parliament should get together. “We submitted our demands to Deputy Prime Minister Bekir Bozdağ,” he points out and says that they are waiting for the government to call them for negotiations. Converting the Madımak Hotel in Sivas where a fire killed many Alevis in 1993 into a museum and abolishing required religion courses are also among their demands.

Bülbül, on the other hand, says that in order to make demands from the state, Alevis themselves must first be recognized. “Alevism has been forbidden since 1925, when religious orders were closed down by law,” he notes and he argues that the state has deliberately oppressed Alevis. According to him, the state policy has been to convert Alevis to the Sunni faith.

‘Alevis are the blacks of this country’

There is a widespread conviction among Alevis that they are the victims of discrimination. “I personally have felt discrimination; people who don’t know that you are Alevi often say negative things about Alevis,” says the young businessman. According to him, “Alevis are the blacks” in Turkey. Criticizing Prime Minister Recep Tayyip Erdoğan for his remarks on Alevis, he noted in particular that when Erdoğan said at a rally that main opposition Republican People’s Party (CHP) leader Kemal Kılıçdaroğlu is Alevi, people booed.

Hortoğlu claims that being an Alevi is sufficient reason for discrimination within the bureaucracy. “You cannot change it by changing the law, the mentality must change. One cannot say, ‘We are brothers, but I get a bigger share,’” he adds. In a similar statement, Doğan argues that there is discrimination against Alevi youngsters when it comes to employment with the government. “Their names are taken off the list during the interviews,” he explains.

According to the Alevi businessman too, there are still biases against Alevis in society. “Some Sunni families still do not want their daughters to marry an Alevi and some do not consider Alevis Muslims, as if we have no faith,” he complains.

Speaking of relations with the larger Sunni community, it is essential to mention a recent project undertaken with the encouragement of the Islamic scholar Fethullah Gülen and the CEM Foundation’s Doğan. In September, construction started on a mosque and a cemevi that will occupy a complex of buildings and share a courtyard in an effort to overcome biases in both communities. However, Alevi reactions to this project differ.

Naturally, as one of its pioneers, Doğan supports the project and dismisses arguments that it is designed to assimilate Alevis. “Those who do not know about Alevism are not aware that Alevis cannot be assimilated,” he responds. Hortoğlu, too, says he is not only in favor of the project, but he is also one of the advisors on the project. However, the head of the Pir Sultan Abdal Association has distanced himself from the project, stating that Alevi prayer, or cem, cannot be performed in a mosque and it should be separate.

Doğan believes that the state established the Pir Sultan Abdal and Hacı Bektaş Veli Associations to counter the CEM Foundation.

Özel has reservations about the project, as well. Even though he finds the fact that the project received important Sunni community support “meaningful,” he thinks that such projects should remain “symbolic,” as every temple is unique to its community.

The Alevi businessman also says that he is in favor of the joint project, noting his belief that most Alevis become assimilated because Alevism has a strictly oral tradition. He believes that except for some small, sincere Alevi associations, many of them are used as a stepping stone for those with political ambitions. Agreeing with that comment, Özel adds that it is true, but that no one who has used Alevi organizations as a tool in politics has been successful.

Alevis are organized under various associations and foundations. None of them claims to represent the whole Alevi community. Indeed, there is not even an exact figure recording the size of the Alevi population in Turkey.

According to Hortoğlu, there has been no census of the Alevi population, but he estimates there are 15 to 16 million Alevis, based on some surveys. Due to concerns about discrimination, he does not believe an accurate population count could be made with a census. Hortoğlu says that no federation can claim to represent 16 million Alevis, noting that his federation represents “the traditional Alevi line.” Hortoğlu believes that at most 300,000 Alevis are members of such federations.

Bülbül estimates that there are approximately 20 million Alevis in Turkey based on what is known of the areas with a significant Alevi population in Turkey, but disapproves of a question asking about faith on any census. Doğan provides even a larger estimate and says that there are 20 to 25 million Alevis in the country. Unlike Bülbül, Doğan says that measuring the number of Alevis would not be considered discrimination. “You could add a faith option in the census. Nobody would oppose it if you tell them in advance that such a census is being made to allocate tax money,” he explains.

Arguments and discriminatory rhetoric used by the prime minister against the Hizmet movement spoil the emotional well-being of our people; undermine social peace and prepare the groundwork for violence by sowing the seeds of hatred in society, the Journalists and Writers Foundation (GYV) said in a forceful statement published on its website on Thursday.

TUĞBA MEZARARKALI, DİYARBAKIR/TURKEY Prominent writers, academics and representatives from various media organizations gathered on Saturday in the Kurdish-populated province of Diyarbakır to discuss the role of the media in promoting social cohesion. The workshop, titled “Social Cohesion and the Media,” was organized by the Medialog Platform, an industry advocacy group connected to the İstanbul-based Journalists […]